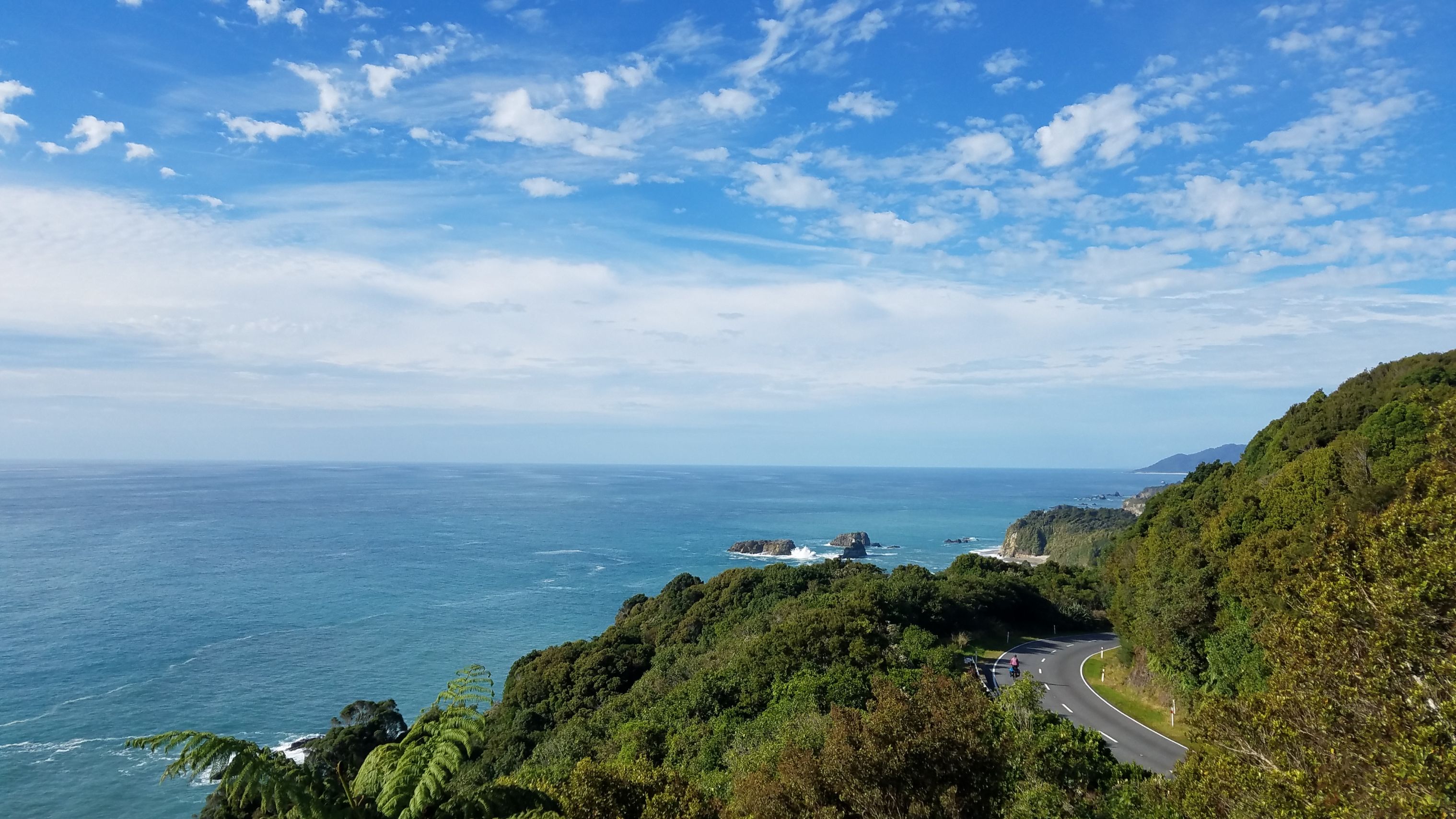 The strangle hold of 99% humidity is relieved

For the first time on this journey we were in the Southern Hemisphere. Having cycled from 51 to 1.5 degrees north using pedal power, we suddenly shifted 4 hours in time zone and 46 degrees in latitude through the advent of modern air travel. It was a strange feeling - to go from the gradual climatic shifts as we neared the equator on our way to Singapore, to suddenly being free of the grip that 99% humidity can bring. The air was crisp and the sun, well, rather perversely, that was insanely hot (anyone who has visited New Zealand can attest to the strength of its ultraviolet rays).

New Zealand turned on the weather for our arrival

Luckily the bikes survived their ultimate test (flight baggage handlers) and also breezed through New Zealand’s strict biosecurity checks (thanks to their one and only scrub down of the trip in Singapore). The beauty of bike touring is you can build the bikes up and ride away. For us it was a beautiful afternoon to take the off road path from the airport into Queenstown. Pitching up at the local camp site we could soon tuck into this town’s most famous attraction - Fergburger. Milly was happy to be in a queue again (there’s always a line here!) and rightly so - to be the highest grossing restaurant by square metre in New Zealand takes some effort to maintain.

Fergburger - a must eat in Queenstown. Good vegetarian burgers on offer too!

On the road again we had two days to make it to Wanaka for the wedding of Ali & Stu. This was in fact our target date for arrival in New Zealand upon leaving the UK. We rode away from Lake Wakatipu and into the hills around Lake Hayes on the ‘Queenstown Trails’, a series of off road cycle paths. With some steep gradients and loose gravel, they made the past few days off in Singapore feel like gluttony. Aiming for the Crown Range summit at the end of day 1, we succumbed early in the afternoon to having only reached halfway. What resulted was a glorious wild camp in the bush so we were happy to settle. The following day brought howling North-West winds and a ton of traffic on their way to the A&P show (a big event for rural NZ). Slogging our way up to NZ’s highest pass with a sealed road, we were greeted with the harsh reality of a downhill headwind. No matter how steep the slide down the Cardrona Valley, it proceeded to sap up any gravity gains in speed we hoped for. Alas, we hit Wanaka wind burnt and totally spent.

The trails around Queenstown were some of our favoruites!

With backdrops like this you can see why this region is famous for tourism!

Camping in the woods with just the birds for company

A killer headwind and steep gradient made the climb of the Crown Range road one to remember!

Having travelled in the wilderness for so long we’d become accustomed to going without alcohol for long stretches (especially in Muslim countries), so when the celebrations kicked off for the wedding we’d been madly pedalling to make it in time for, the beer was flowing nicely. It was an incredible setting and we couldn’t be happier for Ali & Stu who had met at our own wedding 4 years prior. With our first hangover since September 2018 and no time pressure we lapped up the beauty of the Southern Lakes district and spent some time with Jules’ former school friend Tom & his family.

The cycle north to Lake Hawea was stunning, with turquoise rivers and golden hills. The sense of space here is palpable with the night sky so full of stars the water sparkles and can seem floodlit. Lunching at the head of the lake we could only think of Rebecca (@thelongwayhome.nz) pulling up to her finish line having cycled from Switzerland. Wellington was our finish line so still some riding to do yet - piling on the carbs at lunch still guilt free. Good old North-West winds toyed with us on the stretch between Lake Hawea and our reconnection with Lake Wanaka (the two lakes being separated by ‘The Neck’) and we struggled to make it to Boulder Point, our first Department of Conservation campground. Whilst cooking dinner on the beach some French kite surfers were making the most of Mother Nature and flying up and down the lake. It made for spectacular camp site viewing - no need for a TV!

The ‘Flying Frenchman’ putting on a show for all the campers

Setting off for Haast Pass, we were awash in a sea of green. The Lakes District having been golden tussock, it was a refreshing vista. Entering Mt Aspiring National Park we could see visions of Middle Earth and New Zealand’s choice for The Lord of the Rings as a filming location. Waterfalls appeared all around us and we could many more than we could set our eyes upon. There were plenty of tourists travelling by car for this stretch and we felt lucky to be drinking up the views on a bicycle and being able to stop just about anywhere rather than the carparks which were at max capacity. We could even wheel our hotel on wheels down to the river at Faintail Falls and enjoy one of our favourite lunch spots of the trip! The descent into the Haast river valley was incredibly steep and we had good reason to warn all the tourers about it on our way up the West Coast. With snowy capped mountains and wide open glaciated valleys we loved the ride into Haast township. It was a surreal stretch and we were very lucky to ride it in fine weather.

The riding down the Haast river was spectacular. In the distance is Mount Hooker (2,640m)

Campsites in Haast were incredibly expensive so Jules thought he’d try a different approach to rest our weary legs for the night - a knock on the local policeman’s door paved the way for a small world scenario. Paul the only local officer not only welcomed us to camp on the lawn, he also knew both of Jules’ brothers. Chris, from working with him in Greymouth and Hamish, through a hospital in Auckland where his daughter had to have her arm put in a cast after coming off a horse. Having planned on cycling to Jackson Bay the next morning and discovering their two children went to school halfway into this journey we decided to stop in and do our very first school tour. With only 11 pupils at the school it was a nice intimate introduction into the curious minds of school kids. When we asked them what the West Coast was famous for, they all cried in unison ‘RAIN!’ …and we had plenty of it for the rest of the day.

Camping on Paul’s lawn - very thankful for his kindness and generosity!

From a world perspective, New Zealand is an isolated country. From a local’s perspective Jackson Bay is literally and figuratively the end of the road. It gives you a sense of how far flung this settlement is. Local Maori used it as a fishing ground for over 200 years before Europeans established a settlement. It’s a wild place, taking the prevailing South-West storms on the nose. If that’s not enough to deter you, we experienced by far the worst army of sandflies in our travels through the South Island here. Sandflies are a little like midgies. Tiny biting insects that appear in such numbers you can sometimes see black clouds hovering for your blood. They appear to be immune to most deterrents and for the first time since leaving the UK we succumbed to wearing a head net.

Our first impromptu school presentation. Luckily the classroom wasn’t too big and the kids were so inquisitive!

Sandflies - the bane of West Coast living. All of the black dots on the tent inner are eager to get inside!

Wild camping on the foreshore that night we had the whole town to ourselves. Not one light on in the smattering of holiday homes. Just us. And the sandflies. Luckily unlike mosquitoes, they go to bed. So the now clear sky and big bright moon was ours for the taking. With daybreak we hit the road north and were incredibly lucky to witness nature’s spectacle on the quiet road. Offshore the now very rare Hector’s dolphin was frolicking in a pod of 10 and in the forest the Kereru (NZ wood pigeon) were performing their mating ritual, an aerial display whereby they climb steeply in a glide until gravity kicks in and they stall and fall sharply to the ground pulling out after a death defying rush. We rode with our heads constantly flicking upward to watch dance after dance.

This region of New Zealand is thinly populated and traffic levels are mainly inflated by tourist campervans. This gives you the opportunity to ride over a one lane bridge so long it has passing bays at several intervals. It felt like it took an eternity to cross it (even letting cars through at each passing bay). By late evening after a glorious ride along the coast we’d made it to Moeraki River where we dropped down to the riverbank and enjoyed one of our favourite wild camps of the trip! Sadly the next day the heavens opened and properly drowned us. We took shelter at an old school in Jacobs River which had been sold off to a pounamu workshop (greenstone). Luckily we could take shelter whilst it really tipped down.

One lane bridges on bicycles are challenging to get acorss quickly witout upsetting traffic. Especially this one across the Haast River

The pounamu workshop the owner was kind enough to let us hide from the rain in with the added bonus of getting a tour!

Arriving into Fox Glacier we had to pitch up for the night inside a backpackers. At $85 it was punchy on the budget however if we were in the tent we would have been swimming in the Tasman Sea by the morning. The rivers were bloated to choking point by the time we arrived in town. In Franz Josef the next day the sun came out and gave us fleeting views of the receding glacier. Although we did have to wait out yet another shower in the very conveniently placed bike shed in the carpark!

Trying to dry our tent in the limited hours of sunshine available. The bridge in the backdrop was washed away just over a week after we crossed in an intense rainstorm

Making use of the bike shelter whilst another downpour came through

We made a quick trip up Sentinel Rock during a rain break and just caught a glimpse of the now heavily receded glacier (just visible in the backdrop). When we visited last in 2004 it was down on the riverbed