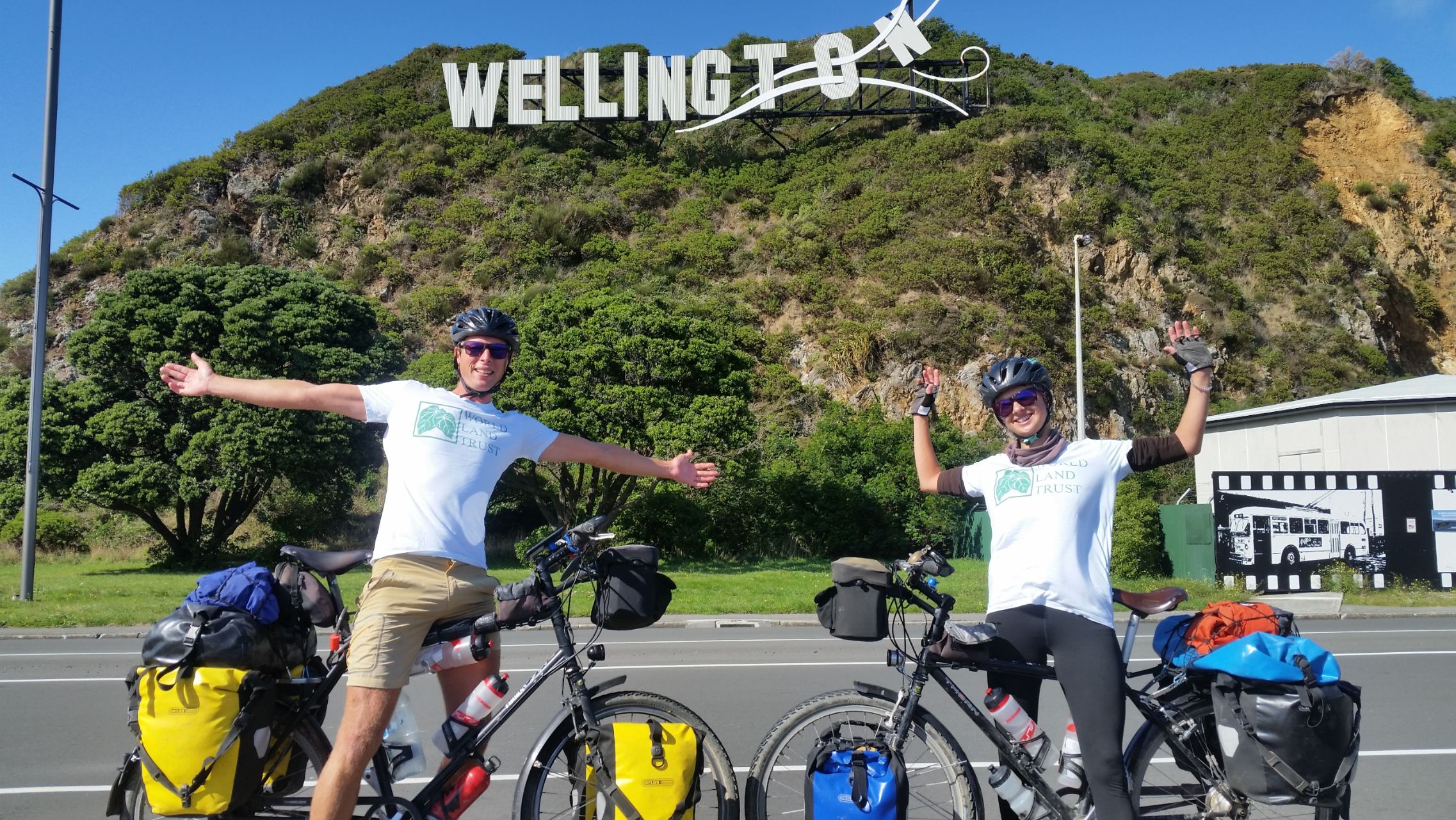 The Molesworth Muster was completed in fitting style with fords and plenty of corrugations. We climbed over the Taylor Pass traffic free before a tailwind blew us down into Blenheim super-fast. This really is wine country and the romanticism of riding through the vines took our minds off the now intense headwind…sometimes you can’t win! Climbing into the bush we got a little protection however we were now faced with some seriously steep gradients on the road to Port Underwood. After 60 kilometres we were buggered. The perfect finisher however was the aptly named Robin Hood Bay campsite where in true Sherwood Forest style, the Department of Conservation have made the campsite free. What a spot to watch the surf roll in.

Ewe really aren’t alone in New Zealand - the sheep population hovers around 40 million, almost 10 to every man, woman and child

Climbing high above the Wairau valley, the home of Marlborough wine’

The descent was a steep rutted gravel road - thankfully we didn’t have to climb it!

Robin Hood bay campsite, which in true Sherwood Forest style was free to the public

We knew we’d hit the Marlborough Sounds when it felt like we were riding on the back of a snake! They’re the sorts of roads that can make you car sick in a minute or smiling with joy on a bicycle. They also come complete with plenty of hills, each revealing a new bay after a punchy climb & swift descent. It really is dream riding. After hitting Queen Charlotte Sound, Jules uncle Ed joined us on his eBike & showed us how 76 year olds can still get about on a bicycle! He kept up with us no problem.

We’re very near the end of this journey however Jules thought he’d give the JRQR one last serve. And he certainly saved the best till last!! All started well, cruising through Picton on a beautiful day soon joining the meandering roads around Queen Charlotte Sound. He then proposed we take the Queen Charlotte track to cut out 10 kilometres on the highway. These shortcuts have been proposed so many times they’ve become hilarious. However, going on a walking /MTB track was the clear winner for peak ‘mini divorce’. We pushed our bikes through rocky streams, over slippery tree roots & sunk into many a bog. It was incredibly tiring! We worked out we could have walked the track faster than biking based on the guide times…it did give us some remarkable views though and as per usual we came out beaming from ear to ear.

Windy roads and beautiful views. Easy on a bike, tough in a car

Jules’ Uncle Ed joined us for the ride into Waikawa on his eBike (he’s now 76 years old!)

The JRQR was here for one more round. The Queen Charlotte track proved to be quite a challenge

It did however give us some amazing views (if you could risk not taking your eyes off the track!)

Rolling over the bumpy roads into the Mt Stokes Scenic Reserve in the outer Marlborough Sounds we were more than ready for a break. A week off at the family bach surrounded by native forest was just what the doctor ordered. Here you can really switch off and get back to basics: making bread in the Rayburn, the oven which in turn heats the water; walking through the bush to check on the creek where your water comes from; and praying for sunshine to keep the lights on and the record player going in the darkening nights. We even managed to dig up a few pipis at Titirangi beach which made excellent tucker. We were lucky enough to be joined by Jules’ parents as well as friends Mike & Riona to help us celebrate getting closer to our final destination. It’s going to be hard getting back to reality!

This friendly Weka was only interested in one thing - our food!

Climbing up to Anakoha Bay Road. The mountain in the backdrop is Mt Stokes, where Jules proposed to Milly 6 years ago in 2013

Riding down to the Read family bach. Anakoha Bay in the distance

The birds in the Mt Stokes Scenic Reserve are small but very tuneful - can you spot the robbin in the branches?

Digging for pipi in Titirangi Bay

We saved the best ferry till last! After a wet and windy ride into Picton we were shortly warm and dry aboard the ferry. Our 19th water crossing was the epic trip through the Marlborough Sounds and across Cook Strait. Sadly no dolphins this time but tremendous views from the outside viewing deck as we said goodbye to the South Island and hello to Wellington, our final destination. Windy Wellington sure lived up to its name as we rode around the bays into a brisk Southerly wind. Luckily for us we had a few extra bodies forming a small peloton. After a celebration in Wellington with friends and family we left to cycle on to Lower Hutt & Jules’ family home.

It’s great to be back but we’re sure going to need some support in keeping us sane as we adjust to static living again. In the meanwhile we’ll be continuing to campaign for sustainable living and hopefully find jobs that allow us to do the same.