Dushanbe to Khorog - Highs and lows 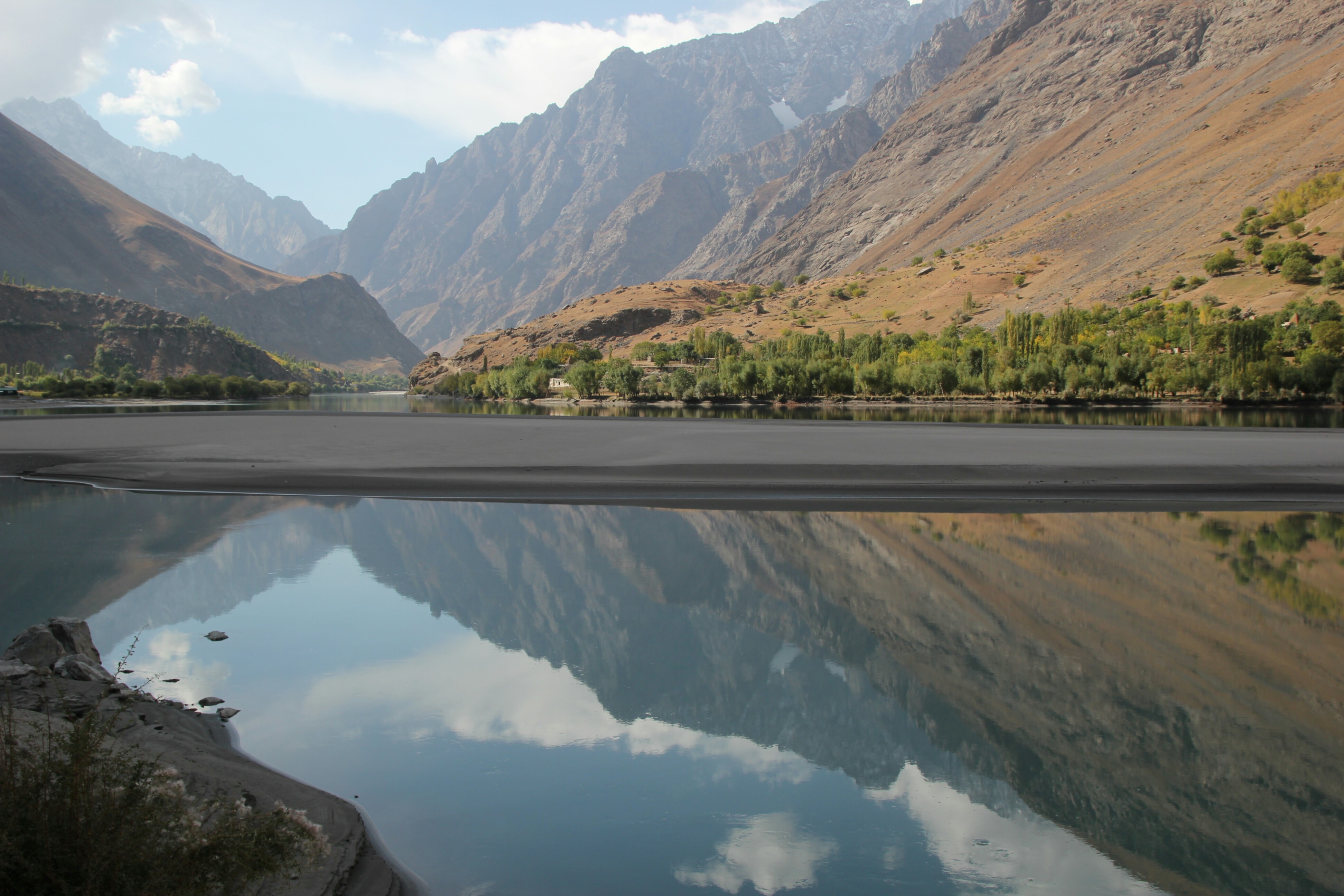 Lake on the M41 - the Pamir Highway

Take the North route or the South? The conundrum every cyclist faces when leaving Dushanbe. Both routes meet again at Kali Khum (no consensus on how to spell this!) with the southern route passing via Danghara and Kulob and the Northern route going via the Tavildara pass at 3250m. The Northern route allows you to acclimatise before heading into the Pamir mountains and is slightly shorter than the Southern route, but is poorly maintained. Following the horrific attack on cyclists near Danghara in July we decided to take the Northern route. This was purely a personal decision as we were in close contact with the Americans involved in the attack. We heard from friends that there is now a 24-7 guarded memorial at the site and all is very safe. Police checkpoints are common in both directions and we couldn’t have found the locals more kind or welcoming.

It was certainly good to leave the big smoke, although it took 40km to get past the traffic and into the countryside to breathe freely again. On stopping for lunch at the side of the road a small girl wondered over carrying four hot bread rolls and offered them up to us, promptly disappearing when we took them. They were the most delicious rolls I’ve had (I still dream of them!) and a good stroke of luck as we found it very difficult to find bread on the Highway until Kali Khum.

The road undulated past decorative bus stops, ironic considering there is no public bus service here, and followed the river up valley. Autumn colours continued up the valley, the oranges and yellows in contrast with the rocky landscapes. Traffic was light, and lighter still after passing the turn off to Roghun, a town where the 1976 dam construction project is finally being finished off with help from the Chinese following the collapse of the Soviet Union. Not far past Roghun the road narrows and then deteriorates significantly. It’s tough riding as it is without having to avoid swerving trucks too. Frustratingly the highway undulates for miles so that you start the day at 1200m, do 800m of ascent, but still end up at 1200m at the end of the day. There are brief areas of respite where the highway is paved again, until you meet the point marked on the map as ‘highway in poor condition’ - yup, you could have said that 50kms ago! The going is tough but the locals’ smiles and kids encouraging high-fives keep a smile on the dial. Lunches became pretty bland with the plentiful shops mainly stocking biscuits and sweets, starting to dream of green vegetables now! There were some bigger shops across the bridge at Tavildara, but no bread on Sundays!

2018 was designated the year of the tourist in Tajikistan

Camping by the river below a vegetable farm

Surveying an impressive braided river on a rare piece of tarmac

The road deteriorates for good!

At least the views are good…

And the kids are good fun

Halfway up the climb to the pass another cycling couple, Matt & Becky (@twobiketo) caught up with us and we climbed to 2800m to camp before crossing the pass the next morning. It’s a very harsh climate up here yet the local shepherd came over for a chat and proudly pointed out his familiy’s five farms where between them they keep 7000 sheep! We fell asleep to their whistles and calls across the valley. The road surface was at least a bit less coarse near the top and warning signs tell you not to venture too far from the road to avoid the mines! Our dream of a quick descent to Kali Khum for lunch was not to be. It’s only 30kms but it probably took us nearly 3 excruciating hours on the breaks to reach the bottom where we binged at the local supermarket and even celebrated with a few beers! It’s a very beautiful descent however and worth going slow to appreciate the views as well as dodging the large rocks from the many landslide debris scattered around. There were even workers out trying to fill in some potholes near the top of the pass so they obviously maintain the road to some extent, although not one car passed us all day until we reached the bottom!

Climbing the pass with Matt & Becky

Milly near the top of the pass

Beware of the mines!

Surveying the route down

A pretty spectacular, if slow, descent down

It was incredibly touching to see this memorial, about 100kms from the site of the attack

Any hopes that the road might improve past Kali Khum were also shattered pretty quickly! It took us two and a half days to reach Khorugh, riding alongside the Panj river which forms a natural boundary between Tajikistan and Afghanistan. It was strange being so close to Afghanistan, watching life go on just as it was in Tajikistan, yet knowing that across the mountains a seemingly never-ending war is raging on. On our side, our bags became weighed down by apples and pomegranates, our record haul being 12 pomegranates and 15 apples!!! The closest we came to a dangerous encounter was waking up to see four wolves run past our friends’ tents at 6am! They’d been howling all night but we never expected to see them so close.

Local girls near our camap spot one night

Mission bread was a success!

Dust riders along the Panj River with Afghanistan on the right

Khorugh is a pretty town with a lush central park and plenty of places to eat. We stayed at the Pamir Lodge, another cycling hotspot and on recommendation checked out the infamous Delhi Darba Indian restaurant and were not disappointed. With clothes washed and bikes maintained we packed our winter gear near the top and headed for the mountains…