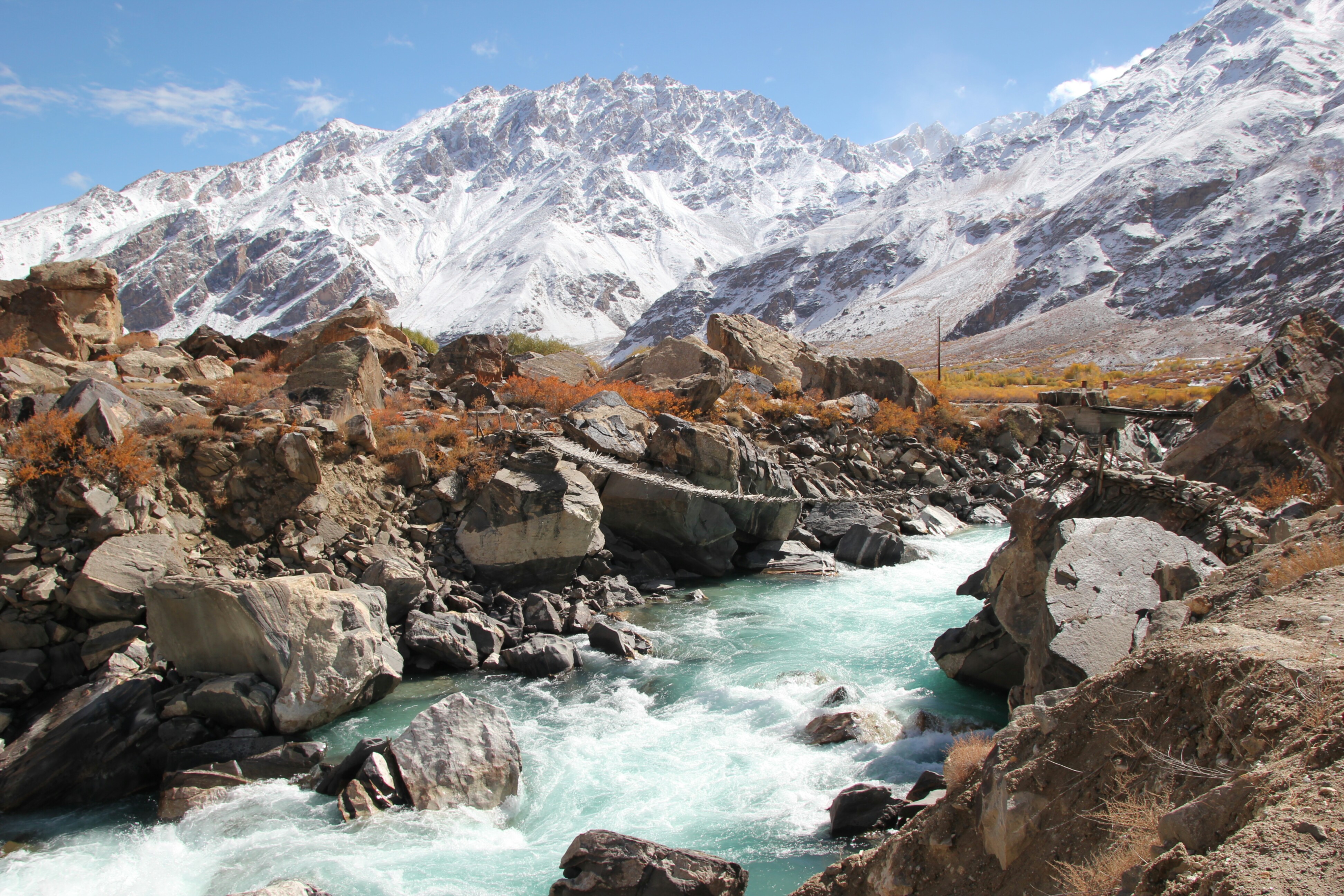 Pedestrian bridge over the River Gunt

We could have easily spent another day relaxing in Khorog but the weather forecast predicted snow falls in the coming days so we left with Harry and Seb, two English lads, to try and beat the storm. The ride is stunning at this time of year. The yellow and orange leaves contrast against the blue sky and snowy mountains. The temperature is definitely dropping and after our first night we awoke to snow in the morning. The cold air and climbing altitude makes for difficult riding on what is otherwise a gently graded and largely smooth tarmac road.

A bearded vulture hunting for prey

Grey clouds build as we near Jelondy

Just before Jelondy we stopped at what were ‘hot springs’ marked on the map. We could see the steam rising from a little stream but no sign of anywhere to take a dip, so, with aching, freezing bones, we wheeled our bikes up off the road to the nearest house. It turns out that the hut next to their house is home to the pools, a steal at 5 somoni a dip (equivalent to 40p)! The owners also let us camp behind the house. There is a seperate hot pool for men and women and a nude policy. Being the only female in our group I braved it by myself! After a hot shower I dipped my toes into the pool and squeeled, it must have been about 60 degrees. The two local ladies insisted the only way to get in was to plunge in all at once, and grabbing my arm they pulled me in, I thought I was going to burn alive!! Amazingly however, after about 20 seconds my body acclimatised. It’s hard to spend more than 15 minutes in there because of the heat, but I’m glad I braved it as it would be the last shower I’d have before China!

We’re at 3500m above sea level now and everything is just that little bit harder to do. Harry was suffering from altitude sickness so we said goodbye to the boys at Jelondy where they stayed another night to try and acclimatise. We didn’t get much further that day, 25km up the road into a roaring head wind was hard work so we camped at 3900m, using the climbing advice not to camp any higher than 400m than the night before, once you’re above 3000m.

The next morning we again awoke to quite a bit of snow and got a weather forecast on our garmin device. It predicted snow all day but at that point we could see blue sky so headed for the pass at 4272m. There was snow and ice on the road, trucks broken down, trucks sliding down, and softly softly more snow started to fall. By 11am we’d reached the first saddle but there was one more to go and snow now falling thick and fast. At 2pm, mid-blizzard, we reached our highest point, but no time for celebrations, no time even for lunch, just chocolate and biscuits to fuel us on. The road to Alichur from the top is NOT all downhill but a frustrating undulating road, down, up, down, up, still covered in snow. By the time we were 5kms out and could see the downhill to town the road was thick with ice and I pretty much walked into town, limping into a guesthouse. My back wheel had completely frozen brakes, spokes, and even the Rohloff hub. We had to wait until 11am the next day for it to thaw out!

Setting off in the snow with the locals

Arriving in a bitterly cold Alichur at Nur Guesthouse

Inside our cosy guesthouse Nur

It took 4 hours in full sunshine to thaw off!

What a difference a day can make! The sun out, and a spectacular view of the Alichur plains instantly warmed us up. Cycling out of Alichur we bumped into Matt & Becky again, the couple we had cycled into Khorog with. They had also got caught in the blizzard yesterday but had managed to find a guesthouse before Alichur, where they’d stopped to find Becky some warm gloves! The snow had thawed on the road but temperatures barely went over 2 degrees all day, and on reaching the last pass before Murghab at 4129m we spied another guesthouse to spend the night.

The owners make all their own butter and yoghurt from yak milk and bake fresh bread in their bread ovens outside. The house has two rooms, heated by a woodburner and wet back. It was cosy, warm heaven. People here speak little English and even less Tajik as they belong to the Gorno-Badakhshan Autonomous Region, an area spanning 45% of the land area of Tajikistan, but home to only 3%of it’s population. The stats give you an indication of how harsh a region this place is to live. The coldest ever surface temperature was recorded at Alichur as -60C.

Golden marshlands on the Alichur plains

Still cold, but a clear road for miles ahead

Raw beauty on the Alichur plains

Guesthouse and hamlet of Mamazair

Inside the guesthouse main room

Wearing every item of clothing we own the next morning we descended into Murghab, dreaming of hot coffee and lunch. Murghab is the biggest town for miles, but shut up shop now the tourist season is over. So biscuits and chocolate for lunch again then! We said goodbye to Matt & Becky who were heading towards Osh. They’ve since made an epic video of their cycle in the Pamirs, in which we feature a few times! It really gives a good impression of what it’s been like to ride over the past few weeks - click here to view.

Onwards towards our last pass in Tajikistan and the Chinese border. After another 20km from Murghab we find ourselves in a huge plateau with nothing but marshland, plains and mountains to see for miles. The road also turns to sh*!t and exhaustion set in. As is often the way however, when you work your hardest you get the biggest rewards and pushing on down the valley into the whirling headwind, around the corner was the most beautiful camp spot next to the river. Frozen toes, sun setting, it was a magical place to sleep.

Descending from the high plateau

A rather magical frozen river

We’d got pretty good at keeping our water from freezing over night by wrapping our bottles in waterproofs and then putting them under our sleeping bags. This morning we also had to collect water from the river, which had overnight turned into a flowing ice stream! Only 15km more gravel and sand before the road turns into beautiful smooth tarmac (funded by the Chinese). It was only about 50km to the pass but it took us all day as the altitude and previous days exhaustion started to set in. Back up at 4000m the road froze again making progress slow, but despite this it was one of the more beautiful climbs in Tajikistan. Harry and Seb passed us in a truck near the top and we all made camp in a frozen meadow away from the line of trucks that had built up over the weekend and were queuing to cross the border. That night, at 4300m, was the coldest, most exhausted I think I have ever been. Even breathing was a struggle and I was sick of altitude headaches. The border doesn’t open until 9am so we at least got a lie-in before cycling past the 50 or so trucks to the front of the queue and cross into China!

Did you say tarmac?!

A beautiful ascent up to the Kulma Pass…

…until the road turned to ice…

Camping at 4300m was physically exhausting!

We made it! Highest point on the bikes so far - 4365m above sea level.

Cycling in Tajikistan has been the toughest of all countries so far, but also the most rewarding. The terrain and the altitude can really get you down, but the people just couldn’t be friendlier. Cycling in Autumn has both its ups and downs! The cold and snow as you climb above 3000m can be tough, but I imagine some of the lower sections would be equally tough in mid-summer heat, and the autumn colouis are hard to beat. It’s the first country where we’ve met so many other cyclists too, so you’re never more than a day away from a friendly knowing smile pushing you forward.