Franz Josef Glacier to the Awatere Valley - back in the dry 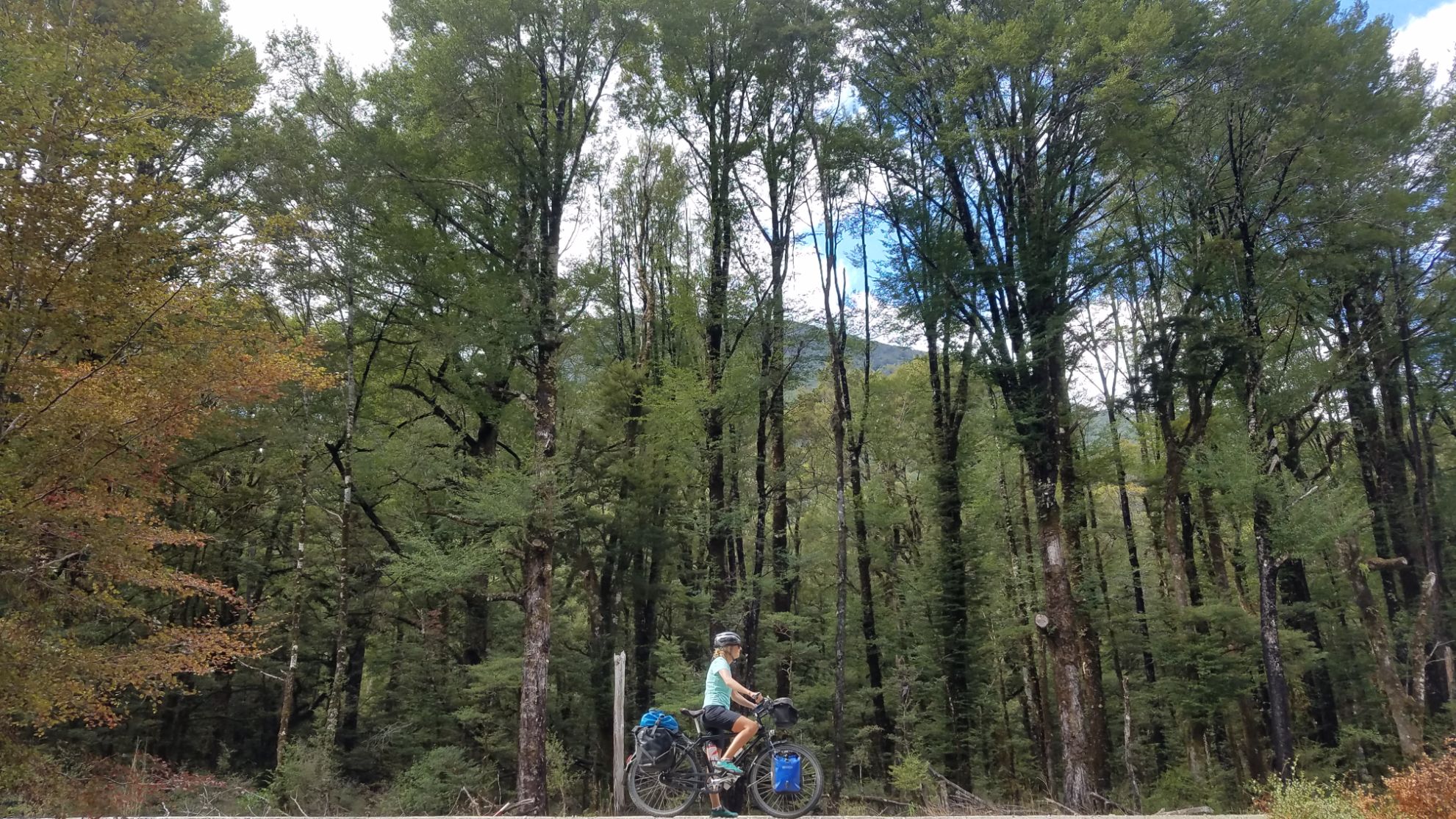 Often dwarfed by towering trees, our insignificance was often felt in the West Coast rain forests

Leaving ‘Glacier Country’ having caught a 0.02% glimpse through the clouds of what it had to offer, we were now just happy to be riding in the dry. Rain can really sap the spirit bike touring, especially when you have limited places to hide and it’s been battering you for two days straight. Camping at Lake Mapourika we did manage a fleeting view of Aoraki/Mount Cook which at 3,724m is Aotearoa’s highest peak. We also had a chuckle at some kiwi ingenuity - taking a picnic table complete with parasol and slotting it into an aluminium raft. With glassy water this lake made a great backyard to hang out in. Once north of the glaciers the landscape changes from dense rain forest into more wide open expanses and dairy farms taking advantage of the flat land on offer. Jules saw an opportunity to take a JRQR and divert around Whataroa. Sadly this resulted in a rocky river to ford and a deep wedge of cow poo to trundle through. We’d just read about the town downstream of this route having their water supply contaminated by E.coli. Maybe this was the culprit?

In New Zealand this would be remarked upon as ‘Kiwi ingenuity’

Followed by an obstacle the designer of the route wasn’t too happy about. We could only laugh together all the way up the road

By this stage the traffic levels were increasing as industry changed the landscape from campervan heaven to milk truck hell. Luckily for us after some ‘fossicking’ in Ross we could divert onto our first ‘NZ Cycle Trail’ route. The West Coast Wilderness Trail (WCWT) is one of 22 dotted around the country, and for us it was an incredibly well designed and built course. Taking you from the gold fields of Ross, along an old railway, up to Lake Kaniere and a set of old water races used for gold sluicing, into the lush forest on the Arahura River and back down to the coast again via the Kumara and Kapitea reservoirs. Being off road for the vast majority we could take it slow and tune in to the bird song, something we both love to do whilst riding.

We couldn’t help but laugh at the enormity of these signs. The irony is they are placed all over NZ cycle trails which are in very low traffic areas. Obviously part of the design. The sad thing is they’re not really necessary and would be far better utilised on New Zealand’s highways where cycle signage is severely lacking

Back on the coast we crossed the Taramakau River which used to have one of New Zealand’s last remaining one lane road/rail bridges. We discovered that only last year this had been replaced with a two way independent bridge with independent cycle lane. This still being part of the WCWT we were happy to stay off road and ride along the coast track into Greymouth where Jules’ brother Chris lives. We spent three days with their family, drying out possessions, doing laundry and talking for hours at end about the trip. Their son Henry was right into his cycling too and we loved taking him around the block hoping he will develop into a world tourer one day too.

The Taramakau river crossing where until recently all traffic (including rail) crossed the red bridge. It was one way too!

From Greymouth we made a beeline North-East inland towards Reefton where we managed to link up with a Warmshowers host for the first time since Malaysia. Don & Robyn had recently completed a tour similar to us from the UK to Singapore and we spent a great evening with them in ‘Reefvegas’ recounting stories from the road. We both settled on one thing - no matter how many incredible views you set your eyes upon, the memories of interactions with other people during unique situations were always the most memorable. People’s kindness and generosity always rang true, including their very hosting of us during the last few weeks of our tour. Riding over the Rahu Pass into Springs Junction the following day we were lucky enough to be hosted the following night by another Warmshowers host, Peter and Robyn. They lived in an eco-home off grid with roof water supply and making as much food as possible whilst the garden grew as much as they could eat. They taught us how to make yoghurt and we’re still partaking in this whilst a very long list of other treasures awaits for us to try out.

Don & Robyn in ‘Reefvegas’ and their dog ‘Snifter’

Peter & Robyn who lived with a very light footprint. They taught us a lot about how to live sustainably

We left Springs Junction with news that an ‘Atmospheric River’ was on the horizon. We’d never heard of this phenomenon yet the name scared the hell out of us. Proximity to the West Coast, and something sounding a lot like a rain bomb in the midst could only mean one thing. DOWNPOUR! Luckily for us we could get over the ‘Main Divide’ (the mountainous spine of the South Island which splits the weather from the East and West coast) and into the rain shadow. Pitching up at Boyle River behind a sturdy bank of Manuka bush we survived a blustery night and managed to keep mostly dry. Sadly Jules’ bike developed a mechanical - the headset becoming loose after his bike blew over in the wind. Now accustomed to fixing these sorts of things on the side of the road in the middle of nowhere, he pulled the bike apart and put it back together in the driving wind and rain. The bus stop shelter was a godsend!

Jules fixing another mechanical. He was very lucky to have a bus shelter this time!

The Molesworth – a New Zealand equivalent to Tajikistan

Bikes and bodies fit to go we were practically blown into Hanmer Springs where we stayed with another Warmshowers host, Grum the local postman. He was a world tourer too having done a multiyear trip and a ton of local mountain biking. Hanmer Springs was also the start point of the ‘Molesworth Muster’, an isolated road through New Zealand’s largest farm. Hanmer was the last store from here all the way into Blenheim so we stocked up and took off over Jacks Pass, a brutally steep, rutted gravel road. Fully loaded it was a real gut buster. Over the pass and into the Clarence Valley we were treated to a golden countryside completely deserted with just a few cattle for company. Grum had given us great advice to camp down by the river where the rafters pitch up before going on their multiday tours out to the Pacific Ocean. We had the place to ourselves and an unforgettable sunset.

Into the wilderness we go

Sunset over the Clarence River

If you want to try out cycle touring and see if it’s the right fit for you and even contemplate a world tour we often remarked this road would be a great test journey. It’s isolation (there’s even a section of road named ‘Isolated Flat’), rough roads, exposure to wind, need to carry a full load of food and resort to the wild for water are all part of remote cycle touring. The situation and landscapes often reminded us of the Pamir Highway in Tajikistan. The section between Acheron and Cob Cottage is only 60km long however we just managed to complete it during the allotted time available (the road is only open between 7pm and 7am) and you can’t camp anywhere in between. We reached the bottom of Ward’s pass (similar to Jack’s - steep & slippery gravel) when the rather aptly named Jim Ward (Molesworth station manager) pulled up next to us and offered to take the bikes up as he had some newly broken in horses behind which would get spooked seeing cyclists on the road and could kick up a storm on the back of a truck. Milly obliged & Jim lifted the 35kg load onto a Ute as if it was carbon fibre road bike! Jules wanted to ride it and raced up the hill ahead of the horses. With pressure on he soon wished he hadn’t. Horses safely past at the top we dropped down into the camp site at 6pm having safely crossed Molesworth with an hour to spare. A couple of other campers offered us a cold brew and great yarns. We were smitten.

Making lunch at one of the information board picnic sites

The wide open and desolate landscape of the upper Awatere Valley

The following day we rode into Mt Gladstone station where Jules’ cousins Jeremy and Hayley Pitts run the station and we were very lucky to spend a day with them out on the farm mustering a big mob of merinos. It seemed fitting as the clothes we’ve worn on this journey mainly consist of this versatile wool. Hayley is right into her mountain biking so we rode all over the 4wd tracks with her. She even musters the sheep on her bike! We also checked out their children’s pet sheep who are good at climbing willow trees & eating all the shoots. They had lost their mums for one reason or another so had to be hand reared. Jack & Harry just love them to bits.

Mountain biking with Hayley and her dogs. She often musters sheep using her MTB

Jack and Harry with their ‘pet’ merino Paul