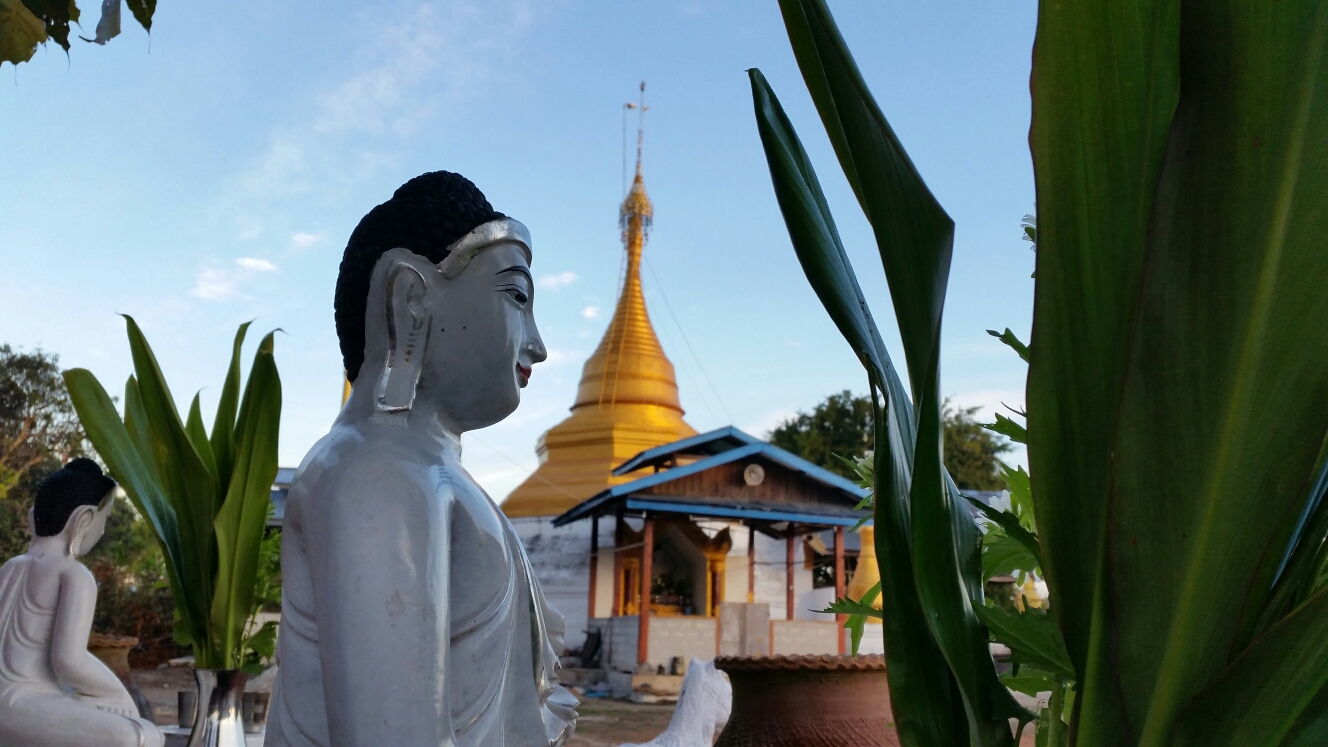 Bagan was a great place to relax over Christmas. All too soon Alex and Cassie’s trip was coming to an end so we decided to treat ourselves with a final night together at the Mt Popa Garden Resort. The resort is only a half day cycle from Bagan and looks up at the extinct volcano of Mt Popa, and perhaps more impressively at the golden monastery perched high up on a rock in the volcanic hills. After being told that the walk up to the monastery was a sweaty tourist trap full of touts and aggressive monkeys we were content at admiring it from afar, watching the gold shades glint from orange to yellow as the sun went down. As you approach the town of Popa you may see beggars lined up on the side of the road, as we did, for at least 5kms. Whilst a little unnerving they never approached us and smiled replying ‘Minglaba’ to our waves and greetings. However, they ran after the smarter local cars taking tourists up to the mountain and it soon became evident why. Local tourists were throwing money out of the window for them to collect. It was a bizzare and sad sight to see.

After saying good-bye to Alex and Cassie we headed east towards Inle Lake. Initially the landscape was dry and uninteresting, with the only surprise being the diversity in agriculture on these seemingly unfertile plains. We saw lentils, peanuts and cotton growing in abundance. Food was harder to find here though and we tended to live off rice and egg, or noodles, always with a good dousing of local peanut oil. New Year’s eve was unforgettable climbing up towards Kalaw on a twisting turning snake-like road that was a joy to ride.

Stopping for a view of the monastery from afar

Monastery in the foreground, overlooked by the mighty Mt Popa

The climb up to Kalaw

Admiring the view at dusk

Top of the climb to Kalaw at sunset

Arriving at Inle Lake we saw our first large fields of sugar cane and then all of a sudden once again faced with tourists, an abundance of food choices (some of the best we had and still very cheap) and a choice of acommodation at very reasonable prices. We took the back-route into Inle and managed to peek a glance at some of the infamous houses on stilts, but decided not to take the boat trip out onto the lake. Had we had more time perhaps we would have, but we were knackered and took a day off the re-fuel our tummies instead! One of the great things about bicyle travel is that you see and experience so much local culture as you ride, so that, for us at least, tourist destinations become a place of rest rather than racing around fitting in cultural activities.

Where the locals queue, you queue, and these chickea pancakes were definitely worth the 20 minute wait

View across the paddy fields to Inle Lake from the south

Hills of hell, rewards of heaven

Leaving Inle along the eastern side of the lake there are yet more hotels, huge resorts which front the lake and block any chance of a view until you are much further south. We experienced some more of Myanmar’s brutal hill roads heading west over the hills to Pinlaung, Jules even had to help push a motorbike up who had got stuck! We were rewarded by a fantastic sparsely populated area to camp at the top and a long downhill to Pekon, Lake Moebyel. It’s then flat all the way to Loikaw.

For once the signs didn’t lie!

A motorbike pauses at the top of a steep incline and watches to see if I’ll make it up!

It then took us 3 days to ride the 200kms from Loikaw to Taungoo with 3,800m of ascent (think the height of Mt Cook or the top of the Aguille de Midi chairlift in Chamonix) except that we were constantly going up, then down, then up again. Just past Loikaw the silver and white pagodas of the impressive Taw Kyat Taun Monastery draw your eyes upwards. These wold be the last monasteries we’d see for a few days however, with the hill faith being dominatly Christian. It was difficult to find wild camps in these hills with few settlements, never appearing at the right time, and largely areas of jungle clinging to the hills above and below the road. We’d ride until dusk each night trying to find somewhere, knackered but with breathtaking views over the forest.

Down and up, frustratingly always having to slam on the brakes to get over the rickety wooden bridges at each river crossing

The wildest ‘wild camp’ yet!

Tumeric drying in the sun

Rat for lunch anyone? The only restaurant we found in the hills had an indyllic riverside setting but a less than dreamy menu. Amazingly a local from Taungoo on hearing our difficulties trying to order simply rice and veg helped us translate and proceeded to pay for our meal as she left. Incredible kindness.

The downhill into Taungoo wasn’t much easier than going up. Squeezing hard on the breaks, praying that the darkening clouds would hold back their rain until we’d reached the flat we edged around the tight corners, on occasion narrowly avoiding a motorbike flying up on the wrong side of the road. About half-way down the twists and turns we had to slam on the brakes as a man was in the middle of the road holding a rope tied to the top of a coconut tree, trying to pull it down! We stopped to watch as first one man scrambled up the tree as quick as a monkey and made a cut with an axe about two thirds up, then he huried down and grabbed the end of the rope with five other men and pulled. After repeating this exercise 4 times, in between which time we had been treated to numerous coconuts and filled up all our 1 litre Maxi-corsa bottles with coconut juice, the tree finally fell and they all ran over to the palm fronds excitedly, scooping down and then holding their hands up high, clutching something in between. One of the men ran over to us palms clutched together and with a wide smile slowly offered up his hands, opening them to reveal 3 baby rats!!!!!

Down, down, deep into the jungle

Not all the downhill was plain sailing

Road works! Incredibly, all the roads here are built by hand

Pulling down the coconut tree

The wonderful family who gave us coconuts

Nature never ceases to amaze. This butterfly took a liking to my saddle!

Reading up on this hill area between Loikaw and Taungoo afterwards I find out that we’ve been cycling between the Shan and Kayin states. The Kayin State have apparently been fighting for independence since the British left Burma in the 1940s. The Karen National Union continues a rebellion against the government to this day and whilst a ceasefire agreement has been signed some areas of the state are still off limits. This includes the eastern roads which run south along the foothills of the Karen mountains, which we found out only after leaving Taungoo.

We saw a lot of these forts, occupied by the Burmese National Army in the hills

The Karen mountains are perhaps most famous for the long-neck ladies, a practice whereby rings are placed around a girl’s neck during childhood and gradually increased in number so that the neck grows longer than normal. Rings are kept around the neck during adulthood. It is quite a sight to behold! Whilst the practice is dying out, the Karen ladies can be seen around Inle, posing for photos and making a small fortune from the curious tourist! We saw these ladies from afar in the hills above Loikaw but have no photo to show, so you’ll have to use your imagination!