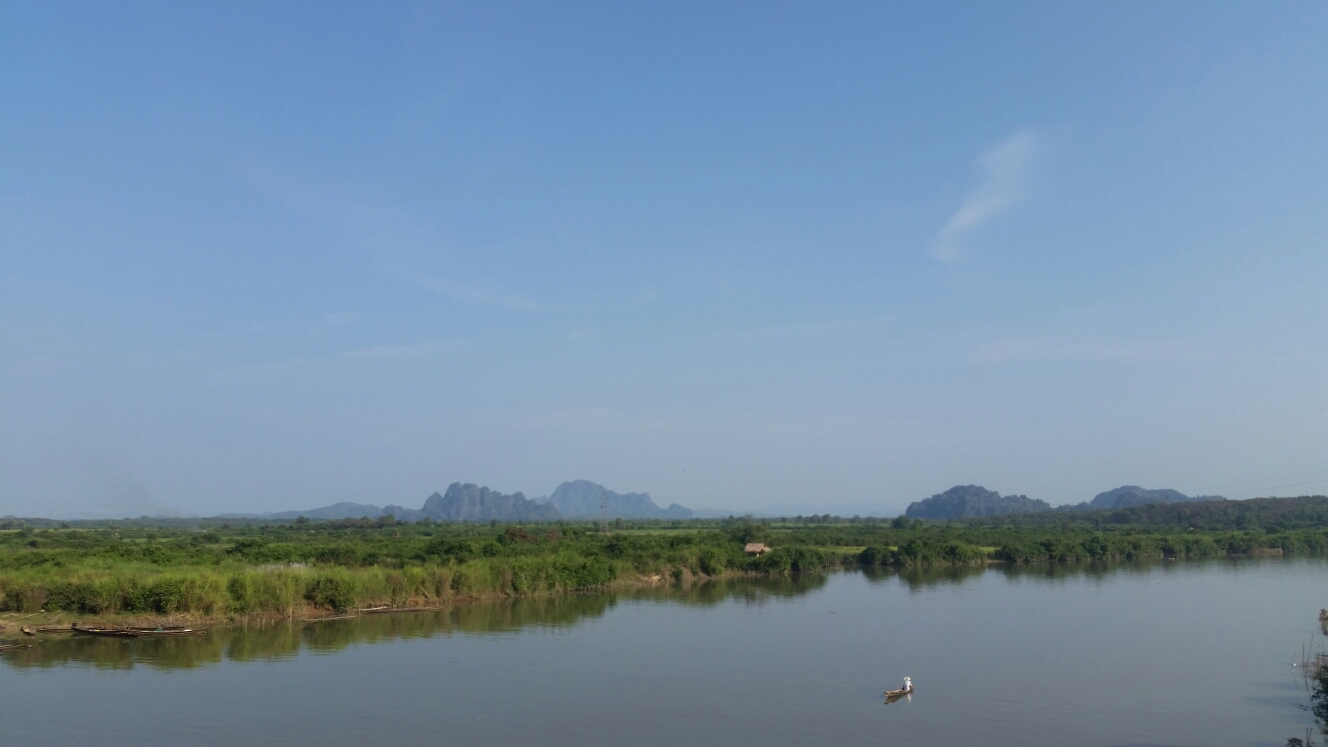 Changing landscapes as we get closer to the Thai border

The first surprise as we arrived in Taungoo was a youth hostel, the second was the pouring rain. It rained all night and all the next day, an unrelentless monsoon downpour. We were frustratingly re-routed back onto the main road after being told the b-road hugging the villages along the bottom of the Karen mountains was out of bounds for foreigners. There were a few saving graces, and to start with, thanks to an Indian influence in this area meant our first and sadly last cocnut dosa. We stood in the rain as the cooks made us fresh dosas, one after the other until I was worried I wouldn’t be able to cycle I was so full! Luckily the road was smooth, flat and fast despite the rain. There was traffic, more than 5 cars a minute which we discovered was about Jules’s happy medium, but with a wide enough road or shoulder not to worry. The upside of main roads is the abundance of eateries and truck stops, which we made good use of.

Acommodation / camping options were however limited so we decided to try our luck at a monastery. Unbelievably the one in twenty we could have asked at turned out to be the same one our friends Daniel and Teresa had stayed at a few days earlier! It has a boarding school attached to it where the kids aged between 3 and 12 learnt monastic duties before and after school. Some of the children had been sent from miles away to learn the Buddhist ways first hand. The girls group helped us set up our tent, gave us dinner and then showed us all sorts of games including ‘Dance, Sing, Model’ a game which starts like Pass the Parcel except that when the music stops and you are holding the parcel you have to choose a piece of paper from the bowlist which will instruct you to either ‘dance, sing, or model’!!! You can imagine a) how often the music seemed to stop on us, and b) how mortifying our acting/singing skills were! We had lots of fun, danced like I was 15 again and probably twisted my ankle as a result!

The locals getting geared up for the monsoon already!

I am salivating just looking at this cocout dosa!

I felt like I was back at boarding school!

Nuns are a much less common sight than monks in Myanmar

We’d managed 100kms yesterday and this morning the exhaustion of the past few days started to catch up on us. We were hoping for a shorter day and cut off the main road onto a beautiful new strip of tarmac that peeled though bright green rice paddy fields and watermelon crops. The day actually turned out tho be the longest on tour - 125kms - as we searched for somewhere to lay our weary heads. Long past dark we eventually found some lovely old monks who ushered us into their hall to sleep and sent away a rather drunk policeman who had started to ask prying questions. It was a relief then to cycle into Thaton a day later, a sizeable town with several acommodation options and excellent eateries.

What a gift in 30C heat and as fresh as you can get! The rest of these watermelons are destined for China as we learnt from the Indian harvesting them

The ever-reassuring sight of stupas signalling a monastery is near

All of a sudden we cross a vast river and beyond the luminescent green of the paddy fields huge limestone cliffs appear in the distance, outcrops of rock that appear as if they’ve been dropped from the sky. As you near Hpa-An the cliffs dominate more of the landscape and as you get closer you can see waterfalls streaming down the side and swimming holes appearing at the base of the cliffs. These are just magical landscapes to ride through, with very little traffic and the shade from the rocks proving welcome relief in the increasingly stiflig heat.

This ice-cream vendor knew where to get a good sale!

Hands down the BEST roadside store we have found with ice cold drinks, frozen lollies and a bench outside to watch the world go by

It pays to be inquisitive sometimes. Seeing these impressive looms from the side of the road we ducked our heads into the shade under the house and ended up getting a tour of this workshop where men and women were weaving fabric for longis (traditional unisex skirts) and larger pieces of cloth fabric

Sadly from Hpa-An your eyes become trained on the road once more as the surface deteriorates to a muddy, rutted mess for over 100kms until you reach Kawkareik. The road bumps through acre after acre of rubber plantations and it’s fascinating to see the rubber dripping from the trunks and then smoothed and laid out in sheets to dry. We’d been advised that rubber tappers often go to collect the rubber or re-tap the trees at 2am, so it’s unwise to camp nearby. Instead, we asked at another monastery and were again accepted with open hearts despite the language barrier. A visiting teacher spoke a little English and showed us where we could take a shower at the local school, before explaining that as it was Friday the village children would be practising their tradional Kayan dances outside the monastery. What a spectacle! At first the girls started, tapping their feet to the drum rythmn and twisting their arms and hands like contortionists as they started to sing in union. The boys then joined in dancing opposite the girls. Each dance lasted over 15 minutes, but they never showed any sign of tiredness, only stopping after nearly 2 hours. It must have been over 20 degrees, humid and sticky. We were sweating just clapping but the dancers hardly seemed to notice the heat.

It felt incredible to be able to watch this spectacle, like we had been invited to a secret party, but for the kids this was just a typical Friday night! In return we posed for the obligatory selfie with each member of the girls’ group, first me, then Jules who looked like a tall sweaty giant amongst these fragile girls, but they couldn’t have been happier!

A lady collects the rubber sap

Latex sheets laid out to dry in the sun

Jules trying his best to stay in the game of chinlone. Chinlone is played with a bamboo ball passed between players in a circle, or more officially over a net. It is played by all ages and is quite incredible to watch the older generations play, flicking their feet into bone-breaking kicks without a flinch!

It was incredibly hard to say goodbye to this crew!

There is a new road which replaced the one way route to the Thai border from Kawkareik. It’s in excellent condition and still fairly steep, but the air definitely cools as you gain height. A welcome relief as we had been really struggling to sleep over the past week. As luck would have it we bumped into Daniel and Teresa at the top of the hill whilst looking for a camping spot. It was pretty special to spend the night with them, exchanging travel stories from the past 28 days since we had last seen them entering Myanmar together from India.

Admiring our final sunset in Myanmar

We all agreed that 28 days just wasn’t enough to explore Myanmar by bike. It is a vast country, stretching much further South than Myawaddy where we crossed the border. For us the Myanmar coastline was left unexplored and remains on the future travel bucket list. The country surpassed all our expectations, the friendliness of people, the flavoursome food, the hugely diverse landscapes and challenging roads put Myanmar right at the top as one of our favourite countries to cycle in. However, the country is facing huge political and religious persecution, that whilst may be on the improve, has a lot to answer for. I pray that as the country opens up more to the world that it’s character is not lost, it’s villages not commercialised and it’s soul not destroyed.