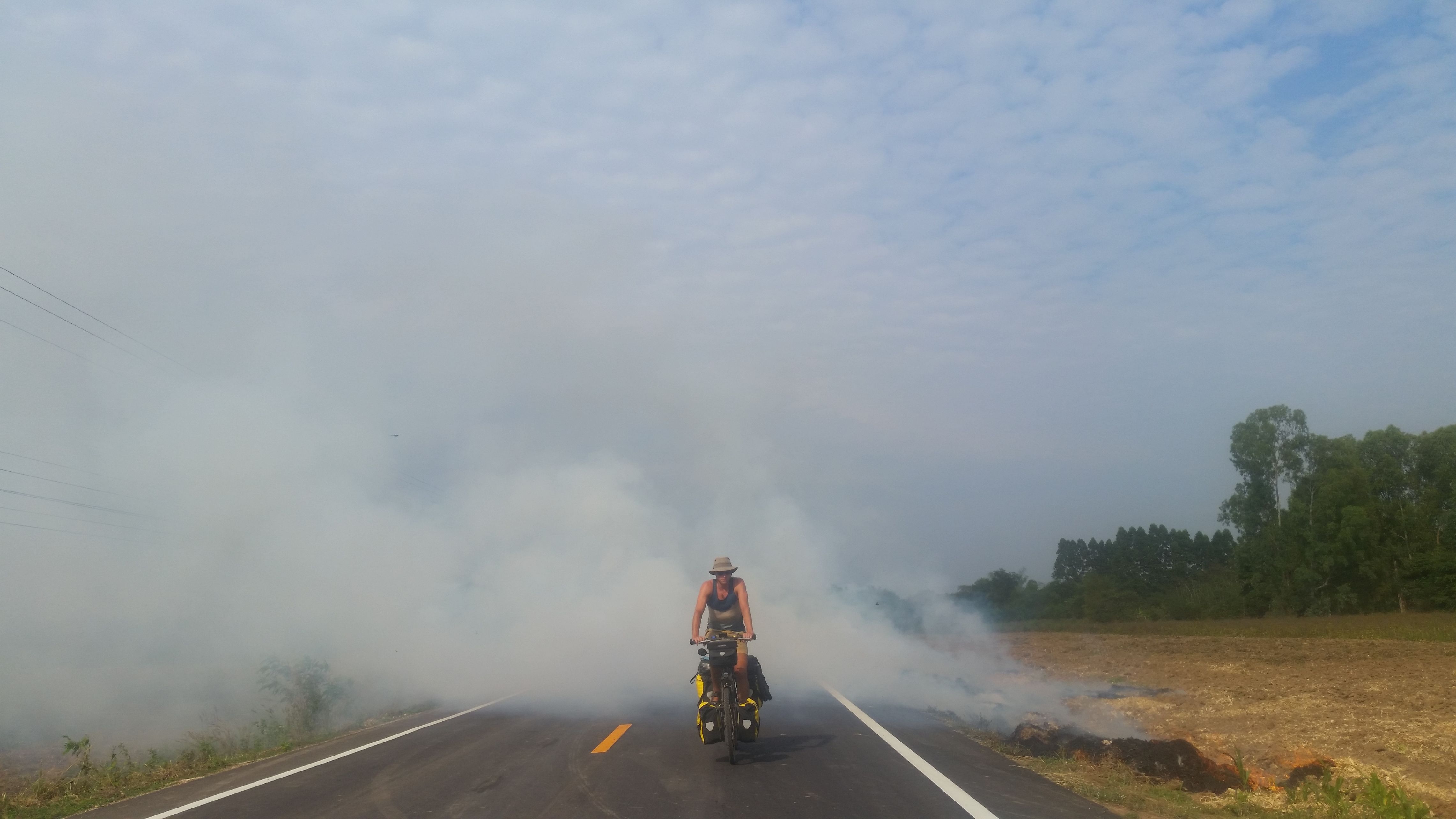 The transition from Myanmar to Thailand was extreme. Thailand felt so modern, so Western. Electronics stores abound, 4WD’s ploughed the roads and 7-Elevens were ever present. Having not seen a supermarket since Siliguri in India we headed for ‘Tops’ which we discovered had everything under the sun including cheese from New Zealand and tea from England. It was surreal after a month in Myanmar. Our first attempt at wild camping in Thailand was an interesting affair. It also shared a strong resemblance with why we’re doing this ride. We found a quiet spot amidst a tapioca plantation & just as we were about to tuck into some grub a siren went off. We thought we’d been busted. Maybe a night in police station under arrest this time. Nobody came after us though so we relaxed a little. Then pots & pans were clanging a plenty & we knew something else was going on. Gradually we realised the farmers were trying to scare off elephants. We’d ridden past quite a few elephant warning signs during the day & this was evidence they were around for sure. Thankfully they weren’t hunting them for ivory. However it was our second lesson this trip of the difficulty wildlife faces when passing human habitats. After a peaceful night’s sleep we were awoken by an elephant hooting away & sure enough the farmers were back at it with the sirens…

We’d been looking forward to Thai food for a while and this was our first of many Tom Yum!

Our second night camping was more relaxed than the first. This Forest Park was next to a river which we delightfully cooled off in after a hard day in the hills’

Jackfruit had become very popular just before we left the UK and until we set eyes upon its raw form we had no idea it would look like this! The fruit are huge. Note to self - don’t fall asleep under this tree!

Thailand felt incredibly modern in comparison to Myanmar. However there were still some building methodologies which put a smile on our faces

Thailand is the world’s fourth largest producer of sugar and don’t we just know it! Endless fields of sugar cane, many of which are burnt before harvest which makes for some interesting road crossings. After days of sugar cane plantations we were happy to move into coconut territory (although we’ll miss the cane trucks going by - they have a sweet aroma from the charring that happens when they burn off the foliage). By this stage we were a few kilometres from the coast which we hadn’t seen since Turkey. That’s over 9,000 kilometres (5,600 miles) since we last saw the sea when we left Antalya June 2018! We were really looking forward to following Thailand’s east coast southward over the next few weeks and it didn’t disappoint.

A burn off seen from the distance. It’s easier to burn the crop in order to strip back foliage and make harvesting easier.

It’s 38 degrees. Ambient temperature from the hot tar probably sends the mercury well into the 40’s. The humidity is stifling. How can the Thai endure a full face balaclava?!

The banyan tree with Buddhist monk robes wrapped around them. The banyan is sacred in Buddhism

Dogs in rural Thailand were a real nuisance. They would chase us until their heart was content. Seeing this pooch on a moving bike kept us sane although we were worried it might still leap out

This friendly local took us back to his place to show us his love of all things cycling. He repairs discarded bikes and makes them available to the public for a small fee

Back on the coast for the first time in over 9,000 kilometres!

When planning our route through Thailand way back in January last year the East coast looked like one long busy highway. Scale catches you out here though. Zoom in & you get to see the detail. Lots of quiet roads along the coast, some even with bike lanes. For the first time on tour it actually felt a little bit like we were on holiday - flat smooth roads, delicious cheap food, iced coffee around every corner, easy camping & sunset swims. We even had tailwinds!

The quiet tranquil roads through Thailand’s coconut plantations were heaven at sunset. Cool air and beautiful light made this our favourite time to ride

Thai ingenuity - a deck chair made entirely from old tyres

For the first time since Europe we had cycle lanes available. They weren’t needed though. The roads were so quiet and the Thai drivers so respectful we never cycled in fear on the roads

Milly’s sister sent us tea for Christmas with little motivational messages attached. The further south we travelled the higher the humidity and we needed little pieces of encouragement to get us through

One of the more bizarre sights we saw across the world. A rooster crowing competition. Owners would berate their prized rooster until it would crow, earning them a point each time

The Thai were super chilled. Hammocks were around every corner and a relaxing local could often be spotted

Making the most of Thailand’s unofficial cycle ways

Riding through pineapple plantations at sunset

Another Forest Park campsite, this time on the coast. Post ride swimming was always appreciated after a hot day in the saddle

And the views were amazing too

Thailand is the world’s 9th largest producer of coconuts. This isn’t enough to support local demand so they actually import too. We passed a fair few trees & were lucky to see 3 different harvesting techniques. The climber who laboriously makes their way up using a cloth tied around their ankles to brace their feet & then hacks away with a machete. The dude with a very very long bamboo pole who saws them off from the ground (these people are incredibly skilled). And by far the coolest - monkeys! Someone stands on the ground with as many as 3 roped up climbing different trees. Based on their calls they twist the coconuts off & let them fall to the ground. Watching them at work was mesmerising.

Husking coconuts is laborious work. To get to the nut a large pith has to be removed. We saw this being done by hand in quite a few places

Buddhist temples were incredibly ornate. Wat Chao Nua 80km west of Bangkok was one of the more elaborate sites we passed

The salt lakes near Phetchaburi were well positioned. Drawn from the adjacent ocean the air temperature evaporated the water in to time. Our faces would often resemble the pan at the end of the day