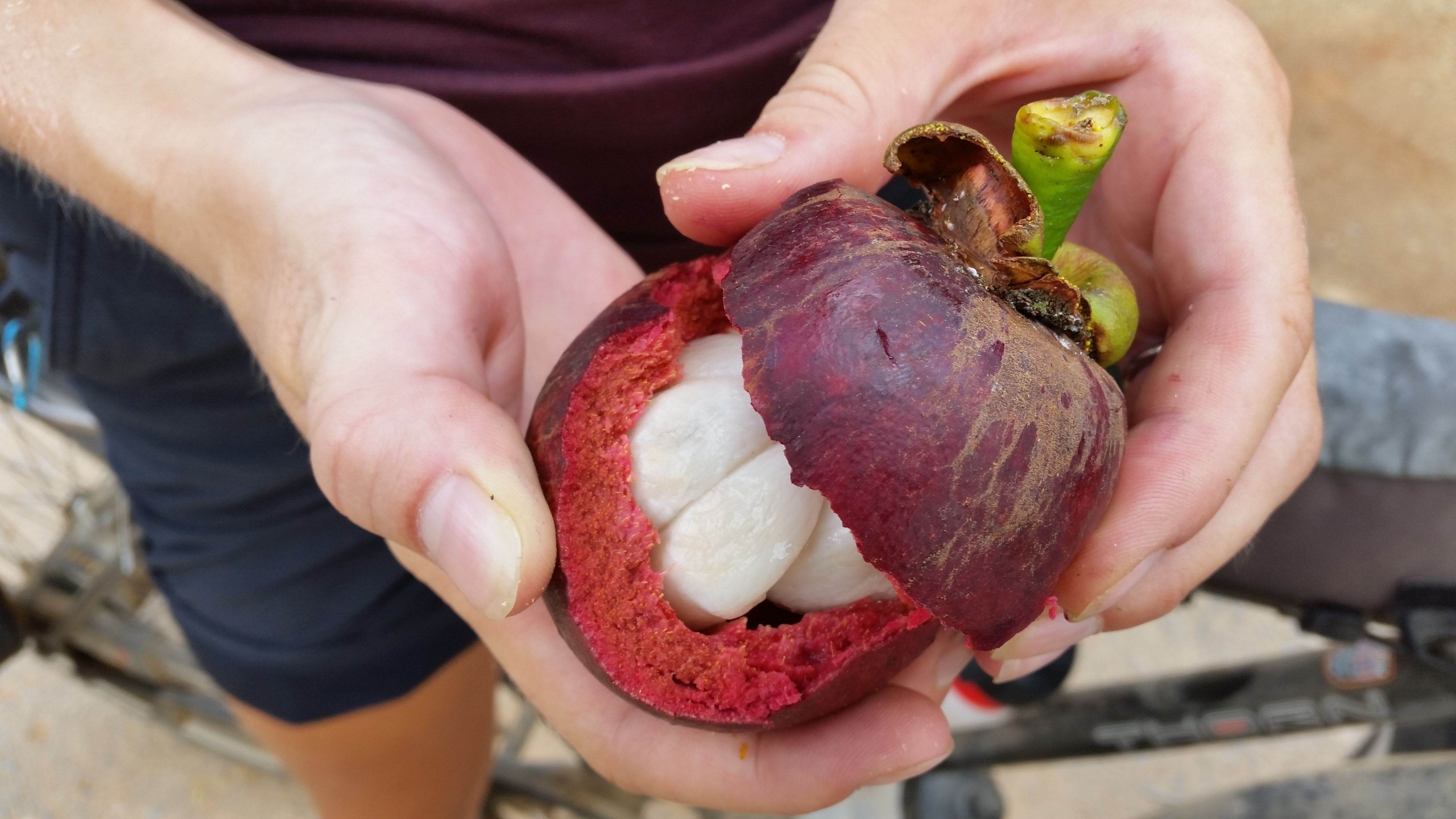 Mangosteen, one of our favourite tropical fruits. They’re remarkably easy to open once you know how and they reveal what looks like a bulb of garlic. They taste far different though!

And this is how they’re harvested - using a long bamboo pole. One end has slits cut into it allowing for it to expand whilst gripping the fruit. A simple twist sideways and it clips off the tree.

Leaving Chumphon was hair raising. Darting through some of the narrow alleys we experienced scooter riders with nerves of steel. They would ride by so close to give us a heart attack yet look in complete control. We didn’t visit Bangkok so didn’t have the opportunity to become acclimatised to their daring driving skills. After a while we learnt to go with the flow and started to enjoy people racing around us. Once back in the countryside we chanced upon the local Mr Whippy selling ice cream from his trike. Coconut flavoured and homemade it was heaven during the midday heat!

Some of them even did so whilst having a drink from their handlebars! This is how the Thai drink soft drinks on the go…

The sound of this trike dinging its bell behind us was annoying at first, then we realised what they were selling!

Rubber is the very product that makes this journey possible. Without it we’d be travelling at a donkey’s pace. We started seeing rubber plantations towards the end of Myanmar & they’ve been fairly constant in the landscape through Thailand, which makes sense as they are the world’s largest producer with an estimated 1/3 of total world production. One night we camped next to a collection area where local farmers drop the tapped latex. The bark is usually cut around 2am when it flows fastest, with collections happening throughout the morning. There are different methods of collection too & your nose will tell you about it. Sometimes they leave the cups to collect the sap into a ball & the smell is horrible. You feel like you’re riding through acre upon acre of silage.

This form of rubber collection is the ‘tap and let dry in the cup on the tree’ method. It smells terrible!

Our campsite at the village meeting area. The locals were kind enough to let us pitch up for the night and in the morning we got to see the rubber harvest in full flight

One of the many rubber plantations we rode through

We hadn’t been fortunate enough to stay with a Warmshowers host since way back in Erzincan, Turkey. In the past 3 days though, we’d been lucky enough to stay with two amazing hosts. Our first was Kleikk who was in the middle of the jungle. His original house was washed away in a storm in 2012 so he built a new house by himself over the last 7 years. For someone with no prior building knowledge he did a pretty good job & we loved his tour around his organic tropical garden he’s nurturing. Durian, mangosteen, pepper & mango to name a few in his excellent selection. Our second host was Suthee & Annie in Phatthalung. These two have hearts of gold & they took us in like family. Sitting around the table sharing a meal with them & their friends was like being at home. Their generosity will be long remembered by us for sure. We hope, with all our Warmshowers hosts, we can pay it forward and host them & other touring cyclists once we reach Wellington, NZ.

By now we were hitting peak sweat. That peak lasted for a long time. Any form of exertion turned into a sweatbath for Jules

Locals offering Fanta to a Buddhist shrine. Complete with straw.

The locals in Thailand were so friendly and kind. Out of nowhere this guy pulled up and offered us half of his lunch!

With locals being so nice to us we could only return the favour. This guy lost his load of crabs all over the road after passing us. Milly rushed to help pick them up getting a couple of nips along the way

Why take the highway when there are alternatives available

This is practically Jules’ mantra and the JRQR was firmly back in action for one last shot at Thailands roads running adjacent to the railway. Once again Jules was determined to avoid the highway & link up some of the gravel tracks on offer. It turned out to be a fun day with many obstacles the toughest being a concrete bar denying scooters access to a barrel bridge. This required a little bit of kiwi ingenuity to gain access with the bikes - some planks from within eyeshot forming a somewhat dubious ramp. With a steep drop down to the water it was scary with the brakes on full & there was destined to be a casualty - Jules’ mirror which landed in the river & had to be fished out with a locals net. The beauty of these routes is the local life you get to savour & one of the strangest sites we’ve encountered came when we noticed a bull wearing odd coloured jandals. We asked our latest Warmshowers host about these huge beasts & apparently they’re used in bullfighting in the south of Thailand. We thought they were on their way to a beauty pageant!

The ‘ramp’ Jules designed to get over the scooter stopper

Sometimes it felt like we were surveying the railway line

Especially when we crossed it for the fifth time!

Until this trip we had no idea how pineapples grew

If you go hungry in Thailand you’re either broke or doing something wrong. There were countless roadside stalls like this in the most remote locations

Nearly a year after leaving London we came around a corner, saw a huge limestone outcrop and watched the odometer tick over. Memories started flooding in - filled with fear riding out of St Malo with over laden bikes, camping in the snow in Switzerland, cursing the state of the roads in Georgia, the incredible hospitality of people in Pakistan, the sardine can sleeper train in India & the endless smiles of Myanmar & Thailand. There’s absolutely no way we could have come all this way without the help & support of family, friends, the online community & of course the people we’ve met on the way. We salute you all. Thanks to some recent donations @WorldLandTrust are the benefactors of £4,000 from this journey which is going towards protecting threatened habitats & wildlife. A huge thank you to anyone who has sponsored us! We’re still aiming for £10,000 so in the mean time we’ll keep pedalling! After 1 month though it was time to say goodbye to Thailand. This country is pure cycle touring dreamland. If you ever want to take a month off and cycle around wide open country full of tropical delights and big wide Thai smiles, this is the place for you

A beautiful ride during golden hour

We will miss riding through chilled villages like this one

The river is starting to impinge on this owners livelyhood