Siliguri to Moreh - NE India a breath of fresh air 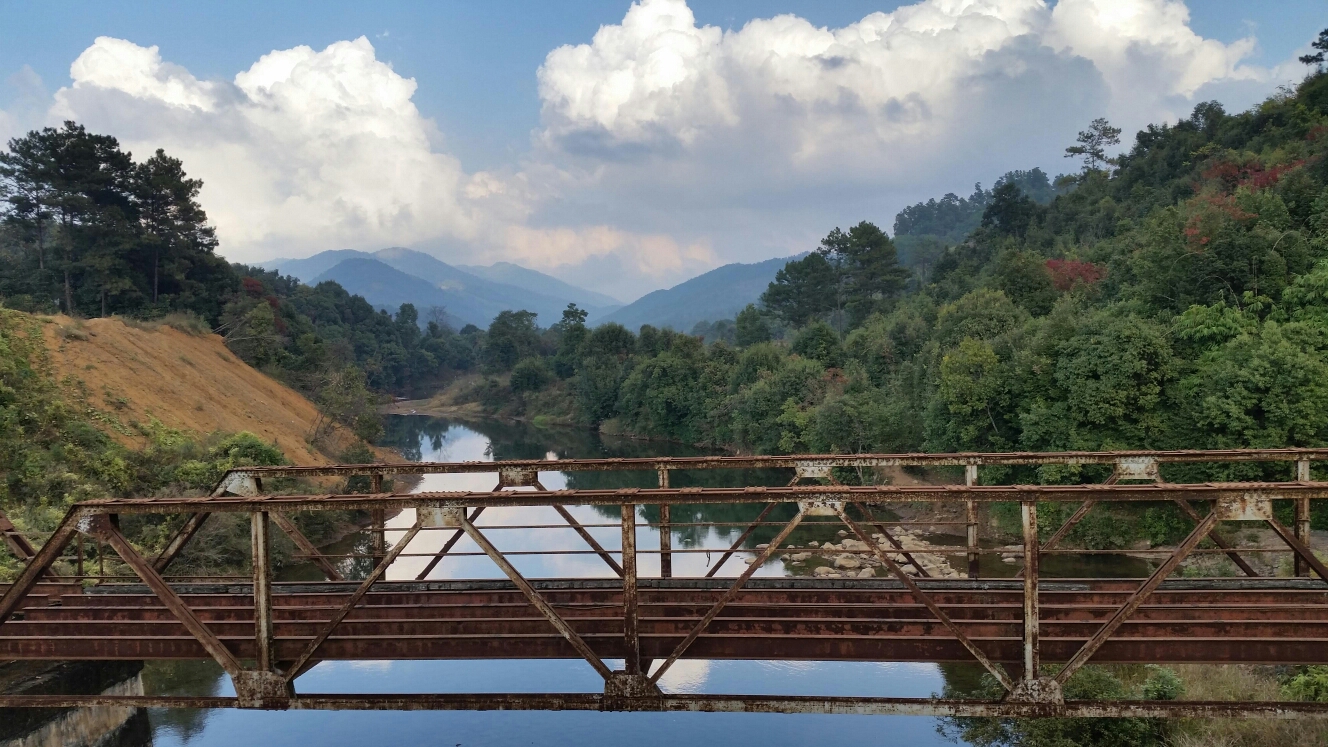 It seemed fitting that after spending our last night in Nepal in a tea plantation that our next stop across the border in India was Siliguri, the gateway to Darjeeling. Our plan was to cycle through the hills of Meghalya state and visit the World Land Trust conservation area in the Garo Hills rather than take the faster but busier roads east to Guwahiti. Running short on time we were not able to explore the north and headed instead to try our luck at booking another train south at Siliguri train station, the cleanest, calmest place in India I have visited so far!

Buying a ticket was considerably easier than our first attempt in Amritsar (see earlier blog) although the bikes caused some confusion. We’d decided to take a passenger train south to Dhubri, a local train travelling 260 kms south costing only 220 rupees (£2)! However passenger trains don’t take cargo, and as bicycles are considered cargo ‘there is nowhere they can go’. After much pressing the station manager said they would be ok in the vendors area of the train, although we may have to explain ourselves further down the line. It turned out the train was positively empty compared with the last one we got, with plenty of room for bikes and seats, and what a ride. With the car doors open we chugged through farmland, immacutely clean stations with colourful flowers and thick jungle with the hills of Bhutan in the background. Imediately you can see we’re leaving the chaos of the other India behind. We did get questioned about our bikes at the last stop before arriving in Dhubri, but got away with the fine (which would have been 10 x the ticket cost) by a lack of English being spoken.

At Dhubri we chanced our luck catching a ferry across the mighty Brahmaputra river to Phulbari, a service that used to be run by the government until one of their ferries sank from overloading and is now serviced by battered wooden passenger boats for a small fee payable on board. We arrived at the landing at 2pm and were informed the ferry left at 3, so on we jumped, wheeling our bikes up the ramp designed to push the motorbikes up, and settled ourselves on the top deck. It took several hours to cross the river, which is the 9th largest in the world by volume and 15th longest, draining China, Tibet, India and Bangladesh. It’s prone to huge floods in Spring but is now low and we get dropped on a sand island with a tough but stunning 4km ride at sunset to another smaller boat that was navigated in pitch black to the mainland.

The ferry ‘dock’ and on board

Dreamlike, we sailed over the Brahmaputra River into the sunset

A different India all together

The ride from Phulbari to Tura was beautiful. After tackling the monsoon damaged stopbanks of the lowlands we headed up into the hills, into lush green forest and past smiling, quizzical faces, who looked bewildered at our shouts of ‘Namaste’! These are Garo people, one of several hill tribes in Meghalaya state whose first official language is English and second their own regional language, Garo, Khasi, Jaintia etc. We felt relieved to be here, not only because of the lack of traffic, but also the lack of people, the freedom to stop and chat without a crowd of twenty gathering around you with phones shoved in your face on full selfie mode. It’s also nearing Christmas and with 90% of hill people being Christans its nice to hear carols and see bright lights and snowmen, however out of place it may seem! Most hill people do not consider themselves Indian and were only ‘brought into the country’ by colonial rule. Meghalaya and Manipur states have a certain amount of autonomy, but are ultimately still under Indian rule.

Tura is not a city I’d choose to hang around in (although it does have a good vegetarian restaurant), but we made a base there from which to join the Wildlife Trust of India and visit their conservation area co-funded by our chosen charity The World Land Trust. You can read more about the visit on this blog here.

You cycle here to get away from the crowds and on leaving Tura you pass just small settlements until you reach Shillong where we were lucky to be hosted by a local Khasi family, where sixteen year-old Dari had put her grandmothers house into Google as a Homestay as a bit of fun! Luckily her grandparents couldn’t be more welcome and cooked us up some local dishes including pumpkin curry served with green beans and tamarind salsa - definitely a recipe I’m taking back to NZ!

Locals were rebuilding the monsoon damaged road by hand

Fresh air in the Garo Hills

Just a few of the incredible family members we stayed with in Shillong - Khublei!

The hills continued up and down, as did the quality of our accommodation options. We had the opportunity to camp a little in the hills but always had a heavy tent in the morning from the overnight dew. Other options included a police station, a Reformed Presbyterian Church, and an overpriced hotel where after months of cold showers this shower was too hot!! You learn pretty quickly in these parts that ‘Hotel’ signs, whether scrawled in paint or flashing neon lights on a building, actually means cafe and doesn’t always serve what it says on the sign!

It wasn’t difficult to spot where Meghalya state ends and Assam begins. Firstly you’re greeted with the gently rolling hills of tea estates, and secondly the selfie requests began again. One guy on a motor bike followed us for 15 minutes trying to catch a selfie of himself riding with us in the background!!!

A very wet tent in the morning

The red spittle you see stained on people’s teeth and all over the streets throughout this region come from this Areca nut. The nut is husked, cut up and placed on a Betel leaf, slaked with lime and chewed, with the resulting red-stained saliva periodically spat out. It’s addictive and big business in the hills.

We saw these kids roaring down the hills on rickety soap box carts making collecting timber a lot more fun!

A giant game of pick up sticks as locals collect bamboo, a staple building material

Sometimes you just have to let the big guys pass

This ‘hotel’ restaurant served great food but not a bed nor a pizza in sight!

A view through to Bangladesh on the descent to Silchar

The lowlands of Assam feel much more ‘Indian’ once again

It was a relief to head back into the hills of Manipur, which is cooler and again home to many local hill tribes. Within 30kms we had already been taught ‘thank you’ in three different languages! We avoided the city of Silchar and luckily the 7000 metres of ascent quoted by our mapping app OSMAnd proved to be less than half on the road to Imphal. You share the road with trucks but they can’t go fast and you’ll be quicker downhill on a bike. The trucks tend to ride in convoy to help each other when breaking down (saw a lot of that), and share meals, it’s quite a community. The road is in varied condition with perfect asphalt interspersed with huge washout and dusty roadworks. Some of the bridges are one way for trucks but you can sail past the queue. From what I’ve heard it’s better than the sandy dusty flats roads to the north but each to their own! A typical day looked a bit like this… (www.relive.cc/view/2017700812).

In Kaimai we were lucky enough to meet the village chief who offered us a bed for the night, as he will to any passing cyclist who wants it. Lenboi Singson is chief of Kaimai holding 900 Kuki residents. They have a small primary school in the village but find it hard to get teachers and teaching resources. The other school options are a 7km walk away in Nagaland and there is some unease between the groups as, from what I understood, Nagas are officially recognised by the government and therefore recieve resources whereas the Kuki are not. Naga chillies (those famous for being ultra hot) also apparently originated in Kuki lands.

At times the road is perfect…

…at other times it isn’t so great

Language is no barrier to fun with these kids

The settlement in the distance is part of an immense new railway project cutting through the hills from Silchar to Imphal, cutting approximately 150kms off the driving route

The road snakes impossibly through forest, up and down through river valleys

Chillies, oranges, pinnapples and other colourful fruit for sale in the hills

Down and around Imphal and then back up, up, up, at least on a smooth new road for starters. Not much up in these hills but beautiful riding through bamboo, banana and pineapple plantations. Any small shops and food stalls were closed as it was Sunday, but a lovely lcoal family cooked us up some noodles.

Moreh is a classic border town, hectic, dusty and rundown. There is a small area and some stores to use up your last rupees but don’t expect to find porridge oats or anything else vaguely western! The border crossing into Myanmar is not as indicated on the map, but locals will soon shout and point you in the right direction. After a few more police checks (thee had been quite a few in the Manipur hills) and a final hill up to immigration we crossed the river into Myanmar.

Knee deep in mud collecting snails just out of Imphal

Into the green, green hills

Roadworks made for some final tough hills in India

India one side, Myanmar the other