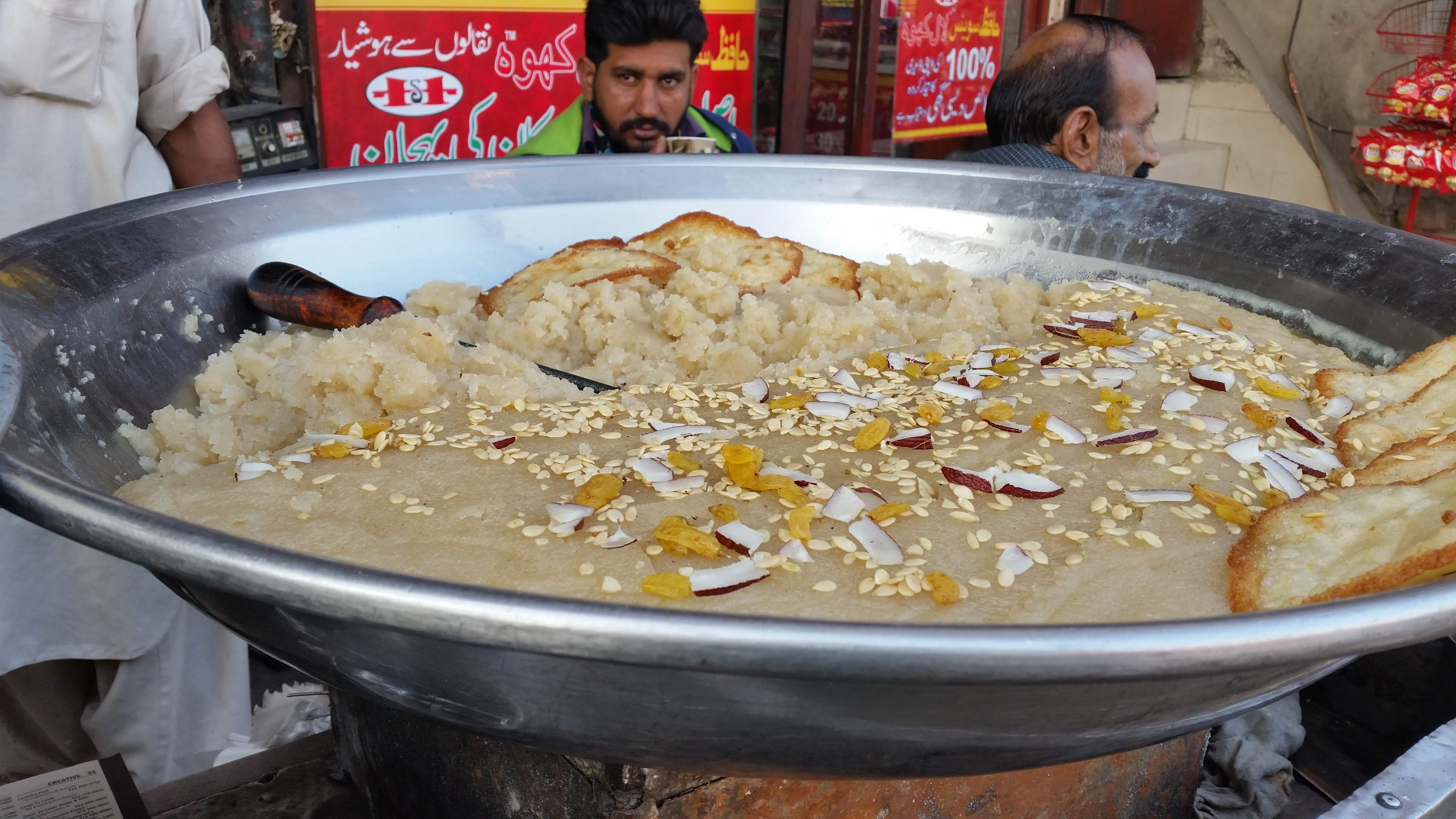 Cycling into the capital city

Whilst it’s only 110km from Abottobad to Islamabad we opted to cycle over two days which allowed us a relaxed morning in Abottobad and an early finish in the big city. It also allowed for any aftermath of the Asia Bibi protests to cool down. We cycled our final few kms on the Karakorum Highway before turning off into the quiet countryside (just before Shah Maqsood) and through the little village of Bagra, where we stopped to buy roti and were treated like celebrities! Suddenly we were ushered to sit, tea and biscuits were brought out and fresh pakoras cooked up for us.

Tea and biscuits in Bagra, with a crowd of course

Views on the quiet route to Islamabad

Having too much fun on the quiet country roads we didn’t quite make it to Khan Pur (the next big town with hotels) before dark. Instead, we were adopted by a local villager who took us to his family home and gave us food and beds. He was fascinated with our trip and said his cousin had done something similar in walking to Germany!! He was desperate to join his cousin and seemed quite serious about attempting to get to Europe. It is difficult to advise against, his house, garden and farmland were all in good shape, but he wanted more and believed he would get rich in Europe. It is nearly impossible, with our limited Urdu and his basic understanding of English, to explain how the concept of rich and poor differs by perspective and country. Especially as, in all likelihood, should he make it to Europe he will be living in worse conditions, working longer hours and be relatively just as poor. Grateful for his hospitality and frustrated not to be able to help more we left for a cruisy 50km cycle into Islamabad.

Relaxing at our friendly villagers house

Our hostess cooking breakfast the next morning

The name means ‘Islam abounds’ and as if to back this up the city is home the gargantuan Faisal Mosque, the third largest mosque in the world, after receiving funds from King Faisal of Saudi Arabia in the 1970s. The city itself is a bit of a nightmare for the average tourist. It was designed as a series of huge grids by a firm of Greek Architects, led by Konstantinos Apostolos Doxiadis. However, unlike the grids of other major cities, such as New York, there is no public transport system linking the sectors and huge four lane highways that criss-cross the grids make walking or cycling very difficult. We mainly stuck to our sector ‘F9’ or took a tuk-tuk or taxi if we needed to get anywhere. There is a bus which runs from the main shopping centre out to Ralwapindi. The city’s saving grace is that it is clean, modern, and quite green nestled into the Margalla Hills. One whole sector ‘E14’has been dedicated Fatima Jinnah Park, a nice place to explore and get away from the urban environment.

Checking out the mosque with Mohammad, visiting from Abottobad

We escaped into the Margalla Hills for an afternoon, beautiful fresh air

I was bed-ridden with sickness for our first few days and grateful to Damien’s Couchsurfing contact who let us use his room whilst he was away. There is a strong Couchsurfing community in Islamabad which is great if you’re up for meeting new people, exploring and don’t mind being used as a trophy-piece for a few days. We had a good trip to the old city Ralwapindi with our second host and his friends who showed us the ancient backstreets and old Hindu architecture that still survives post-partition.

We were lucky enough to be in town at the same time as the Lok Virsa Cultural Festival which runs for a week at the end of November. The festival celebrates each region of Pakistan with displays of local artisans, dancing, music and food. An exciting mix of colour, smiles and smells, this felt more like the Pakistan we’d seen than the sterile shopping malls of Islamabad.

Trees grow through buildings in the run down bazaars of Ralwapindi

Local crafts on show at the Lok Virsa Cultural festival

It was fun travelling with a blonde! Emil got even more selfie requests for photos than normal, so it seemed only fair we get one back

Applying for an Indian visa in Pakistan

India and Pakistan aren’t the best of friends, but they do have one thing in common - their love for bureaucracy. It is not uncommon for tourists to apply for their Indian visas in Islamabad and there are two visa agents you can apply through - Gerrys Visa Services which have recently moved outside of the city, and TCS visa services. You CANNOT apply directly with the Indian Embassy, nor can you cross and land border with an e-visa. However, before heading to the visa agent of choice you must have completed the online application form. Note this is not an e-visa, just a form which then makes processing quicker on receipt of your passport (in theory). Also note than when trying to access this form on the Indian Government website, you may have difficulties if going through a Pakastani IPN address like we did. Luckily we were staying with Mohammad who had a VPN portal allowing us to access the website through a different country code. On completion you recieve a registration number which you must take with your passport, two printed copies of the online form, two passport photos and proof of your Polio vaccination.

From here you’d think it would be a simple process, you’ve basically done all of the hard work for them. The website advertises a 3 day turn around, however TCS told us to expect anything between 5 days and 3 weeks. Not music to our ears as our Pakistan visa expires in 10 days and we need to get to Lahore! Whilst waiting we met up with another cyclist Emil, from Denmark who was also on a tight time frame and had submitted his visa application on the Tuesday, a day after us. We called the embassy every day with no response and finally decided to visit the Diplomatic Enclave and see if we could pick up our passports in person, we all wanted to leave before the weekend. The Enclave is a strange place, we managed to back-door entry with our Couchsurfing host who worked there, otherwise you need to pay 500 rupees (£3) at the gate for the privilege of being driven to your embassy of choice. Disappointingly the embassy had only just received our application - this being 3 full working days post submitting to TCS who are located 2kms away, argh!!!!!

To cut a long story short we eventually got them the following Tuesday, so 6 working days post submission and 5 days for Emil. Lucky we were with him as our SCOM SIM cards failed to work so we never got the call to collect.

Lahore and the Wagah border crossing

The three of us left that morning after quickly packing and riding to the bus station. We all had to leave Pakistan by the next day to avoid overstaying (although we heard a two-week grace period is acceptable we weren’t keen to risk it!) We paid 1070 rupees (£6.50) per ticket and an extra 600 rupees each for the bikes, of which all protesting fell on deaf ears. It was a good bus service with water, snacks and a break halfway, although it took 5 1/2 hours to travel 350kms so we arrived on nightfall and slept at the nearest hotel.

Cycling out of Lahore was an experience, bracing ourselves for the traffic of India!

Jules managed to find some quiet paths in Lahore, but the roadside stench here was nearly as unbearable as the traffic elsewhere

Emil managed to hitch a ride half-way to the border

Always a good variety of vehicles on the road

This is it, cycling to the famous Wagah border

We had the best time in Pakistan but the past week of waiting and sickness has really left us wanting to move on. I’d love to return to the mountains and to stay with friends we made there. So it’s goodbye for now Pakistan, but we’ll be back I’m sure.