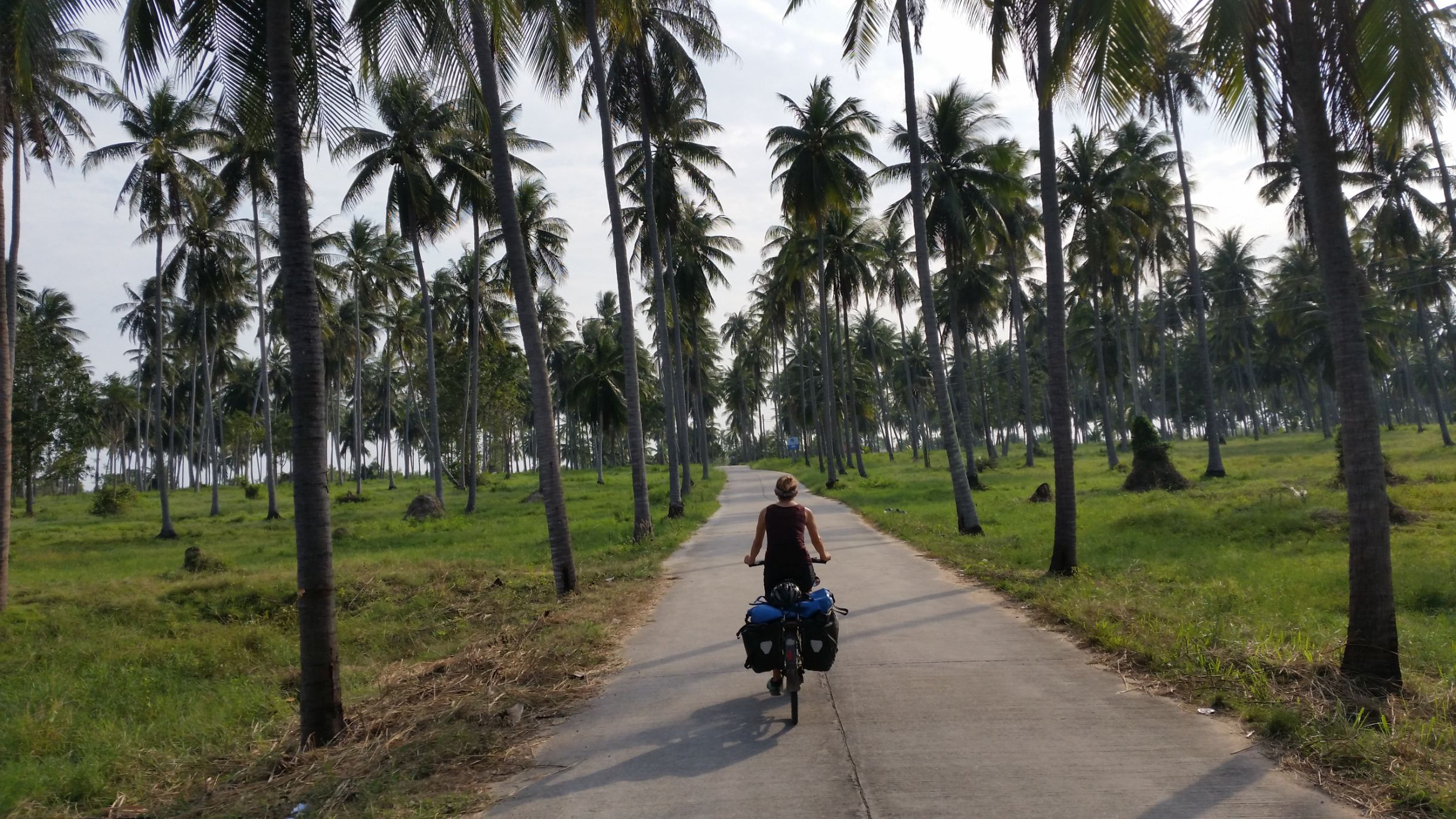 This was a typical day’s ride for us on the East Coast - deserted amongst coconut plantations strung along the coast. The roads weren’t always this smooth though…

Setting off from Prachuap we came to an interesting junction. Left for the main road, straight for Air Force base. We decided to try our luck with the military route as it was a decent shortcut. No one batted an eyelid. We cruised through without intervention and even found ourselves riding across an Air Force runway. For a while we were pretty smug about it. Then we saw civilian cars coming up behind us and realised we weren’t so special. Locals can go through whenever they like…

A typical street scene in a Thai East Coast village

Avoiding the highway at all costs

One day we came very close to a highway. It could have been an easy 65k jaunt south and we even had a tailwind. Jules however can’t stand highways and his infamous JRQR (Julian Read Quiet Route) took us on an intrepid journey. It all started with a slick tarmac road which all of a sudden disappeared & disintegrated into a river. Luckily the Thai are building a new railway line so we could use their bridge to cross over & move on. Next challenge, 10k up the road - another off road track ended with a barbed wire fence. Biff the panniers over and hurl the bikes after. No trouble. This path however slowly turned to a bit of a bushwhack & before we knew it, we were in too deep to turn around. Scratched to bits and nailed by red ants we hit a river which was a challenge to ford however luck was on our side from this point. The new railway line came adjacent again & we could plough through to glorious tarmac again. Just a few puddles to finish off. As per usual there was a lot of cursing & the mini divorce was inches away. We came out the other side laughing & beaming at each other with huge smiles though

Proper bush whacking! If you were walking it would be hard enough. Dragging fully loaded touring bikes through made it exasperating work

The things Jules would put us through to avoid the highway!

That night we camped out on a cliff overlooking the sea and watched the sun slowly rise up whilst enjoying a brew at breakfast. It was an incredible spot and easily one of our favourites of the trip! We read lots of blogs on touring in South East Asia before we left & the general consensus was a light setup is the way to go as you can always find somewhere to stay each night. Luckily we decided to keep the tent & stove which has given us the flexibility to camp in places like this. We reckon the freedom it gives you makes lugging the weight worthwhile. The closer we get to the equator, the more we sweat. We’ve been doing some big days on the bike since ringing in 2019 to get to Singapore on time. January was by far our biggest month clocking up 2,160km with only 4 days off the bike. This was combined with the toughest gradients we’d encountered all journey in Myanmar & the start of Thailand. Dry January it certainly wasn’t… The heat & humidity is incredibly sapping & we feel completely washed out by the end of the day. Everybody kept telling us it’s only going to get worse in Malaysia so we had to make the most of being on the coast and swimming each day to cool off!

Whatever hills we hit, they were small and gave us wide ranging views of the lush countryside

Be careful what you drink - these stands often found at mini marts would use old whiskey bottles to sell petrol to motorbike riders by the litre. They were practically everywhere and it meant getting fuel for our stove was always easy

One of the more eccentric modifications to a motorbike we saw

This was the first time we came across palm oil harvesting. In Thailand small Utes were used to transport the kernel out of the plantations. In Malaysia we were to see it on a much grander scale

Sadly waste from bottled water is a big problem in Thailand. The irony of seeing so many bottles in an old fishing net wasn’t lost on us

Bottled water is still incredibly popular despite Thailand having the widest ranging water purification dispensing machines we came across. For a few cents you could instantly purified water by the litre. We constantly filled up at these throughout the day and were so happy not to have to sterilise using our UV pen all the time especially whilst drinking so much

Throughout Thailand we camped at monasteries. They were safe places for us to pitch our tent and rest our head. We were never turned away after asking politely and sometimes the monks would chat away to us using sign language (or other limited means) for hours

Puppy love was never too far away at the monasteries either. Dogs would often hang around in the hope of food from the monks

A very common sight throughout Thailand was this set of three flags. The Thai national flag (left), the Royal flag (middle) and the Buddhist flag (right)

If away from the coast by a few kilometres, rubber plantations became a common sight

Nearing Chumphon we caught up with Becs (@longwayhome.nz) who was riding from Switzerland to New Zealand. It was great to catch up with her and swap stories and compare the usual ‘what gear, what route, what apps’. There’s a real camaraderie amongst cycle tourers and Becs was yet another in this trusty troupe. She was staying beach side whilst we made our way into Chumphon to take some much needed R&R and catch up on some of the blog

Becs who we met near Chumphon

Tropical fruit was widely available at the roadside throughout Thailand

Whenever we get to a rest day sadly there’s always washing to do. If resources are limited that means doing it by hand and trying to get it dry in your room using the air con (most of the time it worked a treat)