Wang Prachan to Cameron Highlands - In search of cooler climes 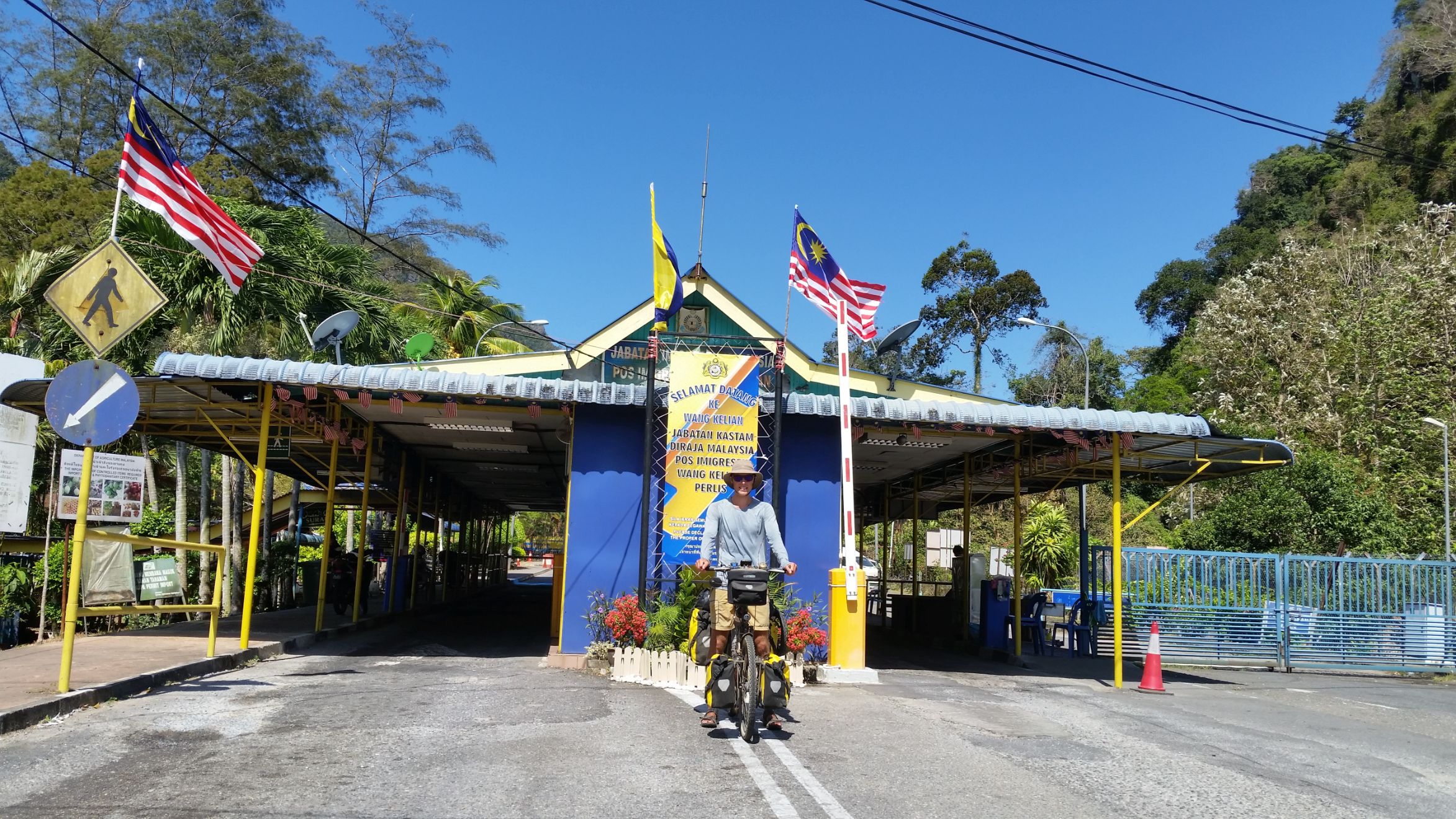 Crossing the border from Thailand into Malaysia was clean sailing

After a beautiful ride through our final Thai national park we crossed into Malaysia, the 25th country on our journey. The border officials were super friendly, letting us take lots of photos and learn a few Malay words with them. Our first few kilometres took a track which had been washed out & sadly had to retrace back to the main drag. It meant a steep climb in midday heat over some limestone outcrops however the views on the way down were breath-taking. We had a stunning ride down to the coast at Kuala Perlis through forest, rubber plantations & small settlements full of teak houses. On a whim, we took a ferry to Langkawi where we did a lap of the island before taking another ferry to Penang to check out Georgetown. After two months without a huge amount of wheat based foods it was also a relief to get stuck into some roti. We ate tons of this stuff!

At first we thought this back road was a winner

Back in the land of wheat. Roti time!

Not sure if this goat was stuck or not…

Langkawi was a beautiful island with plenty of cycling on offer. We did a loop of the main perimeter roads which offered beautiful views but sadly had a lot of traffic & the first aggressive driving we’d seen in months. We did manage to seek out some quiet stretches though & the cuisine was superb. When cycle touring it’s hard to put on weight however Malaysia might be the first place we do. There’s so much delicious food to eat! Whilst touring Langkawi we were lucky enough to see what we thought was a smooth-coated otter. About the size of a dog, we thought at first it was a stray running on the beach however on a closer look we saw it ran with a hunched back & it did a meerkat like sentry pose, confirming it sure wasn’t a canine. The otters are listed as a vulnerable species with their river and sea habitats becoming increasingly polluted. We felt very lucky to have seen this little guy

The colonial customs buildings on Langkawi

Roti canai - these stalls are ubiquitous throughout Malaysia. Often it’s only served in the morning. We were always stoked when we found one serving roti all day. The cheap delicious carb hit was the perfect fuel

One of the more secluded bike routes we found on Langkawi

Getting the bikes prepped for the ferry to Penang

Georgetown, a city we’d never heard of until recently, is a super cool blend of Chinese, Indian & Malay culture. The food on offer is tip-top & the street art is pretty impressive too. We were supposed to take a couple of days off in Georgetown however Penang hill looked so inviting from so many parts of the city we just had to go up. We set the bikes down for this one though & used the amazing network of trails to sweat our way to the top. The ride up the Jeep track would be a good challenge indeed!

We arrived into Georgetown just after Chinese New Year. There were red lanterns everywhere!

Famous for its street art, we went on a ‘treasure hunt’ like 10 year olds and hunted down some of the city’s more famous installations. This is a visiting artists adaptation of its most popular piece

An old bicycle gets a feline touch

A rickshaw rider takes some R&R

The tracks up Penang Hill were quite challenging in places

The train is the most popular way up

The view from the top was stunning

Capturing the gradient was difficult. Hopefully this does one of the hairpins the justice it deserves

Trying to fit in with the locals

Malaysian roads are a huge change from Thailand. For a start the network isn’t as expansive - there simply aren’t as many roads to choose from. In places you can seek out a quiet rural haven however for big stretches you’re on minor highways where the number of cars makes it slightly irritating. A car shuts people off from us & the majority of the time this makes them ignorant. They’ll pass close, there’s no interaction & it instils fear in us. A shame because Malay people are super friendly. Behind a wheel they can change instantly. Why do cars have this effect on people? Whoever invented the saying ‘time is money’ should be disregarded forever. There’s no shortage of greenery in Malaysia whether it’s lush tropical forest or acres of palm oil plantations. Wild camping should be easy then right? Wrong. Monkeys are everywhere and whilst they may look cute, try and get close to take a photo and they’ll bare their teeth and snarl. Luckily we’ve been rescued by the boys at a local fire station who took us back to their flat and out for roti puri later that night.

Outside their place of work

Back on the mainland and in search of cooler climes we took Route 185 up to the Cameron Highlands. It started off pretty intense - our first serious hill since Myanmar & it was roasting. We felt like we were breathing fire. Dark sky’s soon gathered though & after a torrential downpour we were soon hiding in a shack hugging each other for warmth, all in the space of 30 minutes! It took us a while to find any shelter & the rain was coming down so hard it ran straight into our chamois sloshing about like a swimming pool…Having to hide out for an hour meant we couldn’t make it to a homestay & flat camping land was a tough gig. Luckily we met some lads building greenhouses & they let us sleep in their porta cabin whilst they went home for the weekend. Finishing the climb the following day we were met with acre upon acre of greenhouses & a long line of snaking traffic through what we felt resembled a very tired and overhyped tourist trap. It was an interesting transition from beautiful steamy jungle to concrete junkyard. Another example of how destructive man can be in search of tourist dollars.

We went from intense heat to tropical downpour very quickly. This is the steamy aftermath

The portacabins the local workers kindly let us sleep in

If you visit the Cameron Highlands, you will be greeted with view like this. Acre upon acre of greenhouses

Originally the land was settled for tea plantations. Greenhouses followed and so did the tourists