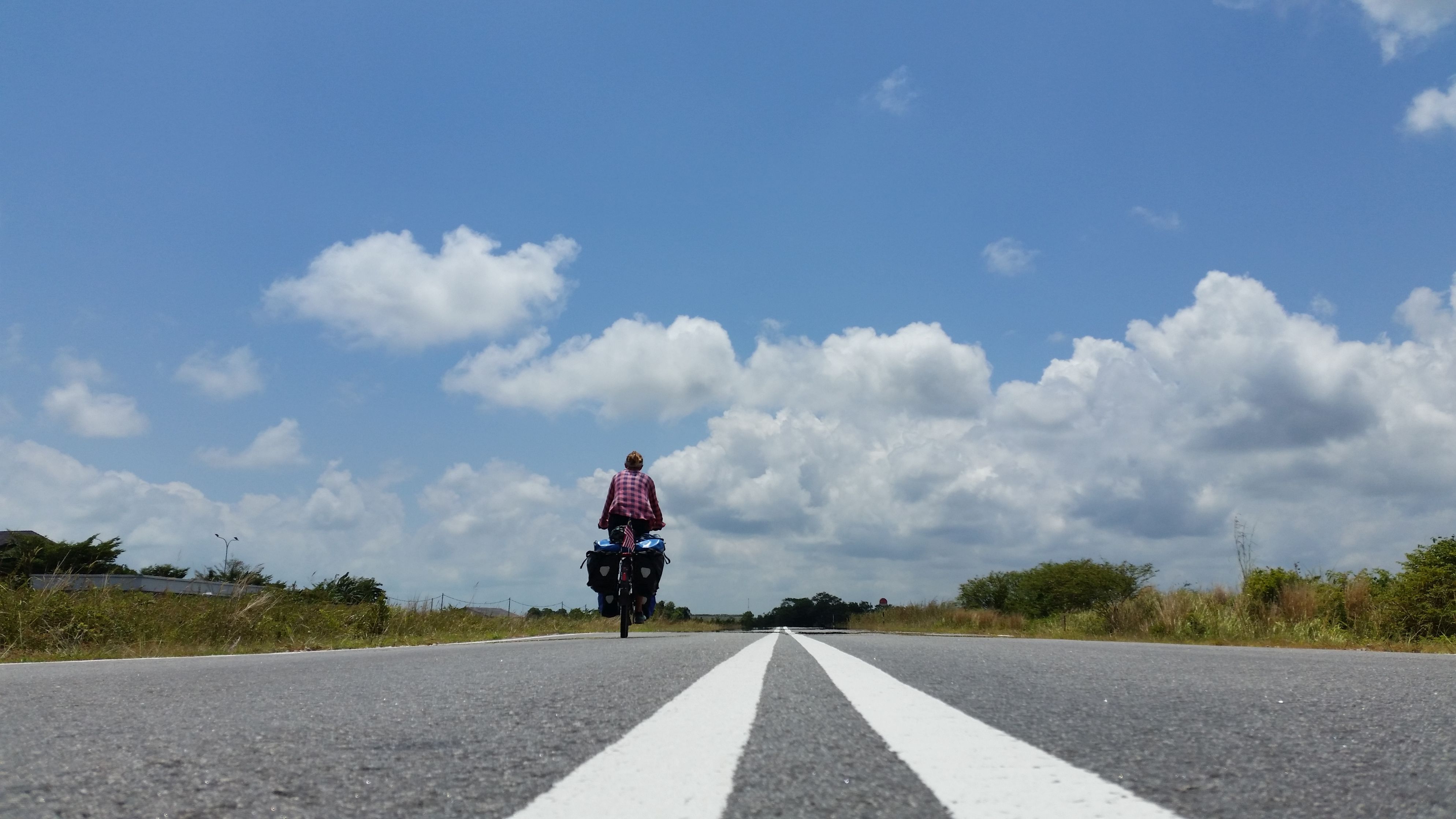 What a difference a day makes! Only 20kms down from the tourist traffic queuing up to visit the Strawberry/Lavender/Cactus etc.. farms, cafes and tea plantations in the Cameron Highlands we’re gliding down through thick jungle on a beautifully smooth and empty road. The only passing cars seem to be local durian farmers emerging from the jungle and leaving a distinct waft in their wake (think rotting mangoes). If only the authorities put in the same amount of effort in sustainably developing the Cameron Highlands as it did building this road. Malaysia’s highland forests not only provide cool retreats but also 90% of the country’s water supply. With increasing deforestation for agriculture forest cover is diminishing, landslide risks increasing and yet road works continue to patch and repair flood damage. It’s a viscous circle.

A Land rover laden with Durian from the jungle. In this part of the world the load would fetch a lot of money. In others the vehicle would be more prized

The host who kindly gave us Malaysian flags to ride with also gave us a deluxe tent pitch complete with fan!

A beautiful teak house in the jungle

Black gold - this is how palm oil grows

Old school petrol station. The fuel is pumped up by hand

The heat was really beginning to drain our motivation. With little wind & the sun beating down the best way to cool down was perversely to keep cycling! The roads in central peninsular Malaysia are beautiful to ride - lots of rainforest mixed with palm oil plantations. Our bikes are also kitted out with a Malay flag after one of our hosts gave us a parting gift. We certainly rode with pride! The following night we asked at a local mosque if we could camp. The Imam said yes and the next morning he thanked us. We couldn’t understand why and he relayed that this was the first time foreigners had asked to stay. We felt humbled by this show of respect

44.7 degrees C - this was the highest temperature we recorded all trip

To beat the heat we tried to ride as early and late in the day as possible. the light was always beautiful to ride in

The local mosque we camped at for the night, with our host ‘James Dean’

We’ve slept at some interesting locations since leaving the UK. Yet for some reason, a fire station (‘Balai Bomba’) had always seemed an unlikely option. We met people in Thailand who suggested they’re good options if you’re stuck out in the cold. We pulled into Maran late one night and they welcomed us in with open arms, offering up one of the many shift worker rooms for us to stay in.

Since entering Malaysia we’ve passed many large concrete buildings which stick out like a sore thumb amongst the palm oil plantations. You hear them before you see them though, with speakers at the top blaring screeching, chattering bird noises. At first we thought they were an extravagant way of getting rid of birds until we saw it was doing the opposite and attracting them. After a conversation with a local involving lots of tongue pointing and a little help from Google we discovered that they are Swiftlet House Farms. Heard of birds nest soup? It’s made from the nests built out of saliva from swift birds. The Chinese go gaga for it and the Malays have found a way to harvest it without treacherous trips deep into caves.

Hanging with the locals at lunch. People were in Malaysia were so nice to us. Some even offered to pay for our meal. It never failed to touch our hearts how kind and generous people were here

Swift ‘hotels’ - one of the more intriguing discoveries on our trip

A classic Malaysian store in the countryside

Warmshowers to the rescue again

When our latest Warmshowers said he’d moved from Pekan to Kuantan, we thought our opportunity to be hosted was dashed. He offered to take us from Pekan to his home for the night however this would have required blitzing 100km in a day before 5pm. At this stage we had ridden 8 days on the trot without a break so we didn’t think we could manage it. We apologised & started looking for a homestay. We were then reminded how awesome people are in Malaysia. Our host got back in touch to say he organised with his boss for us to stay at his college in Pekan & we could catch up in the morning over breakfast. We’ve been humbled yet again.

Our Warmshowers host had plenty of students keen to say hello

From Penang to Pekan - inspired by New Zealand’s recent Coast to Coast we decided to have a crack at our own, Malaysia styles. Instead of entering ourselves into the one day category though, we took 10. It was by far the sweatiest riding we’ve done however the beach hut and ensuing swim at the end made it all worth it. It was obviously hard on Jules’ bike though as he took the baton for the puncture competition having picked up his second at the 16,000km mark (which leaves us at 2-1). With around 400km to run into Singapore & 1,200km in New Zealand, it could be a close run race. Let’s just hope it stays as a football score & doesn’t go the way of NZ’s favourite game.

Our coast to coast adventure had a deluxe finish line

Doing our bit for the locals - Jules rescues a trapped goat

We saw around 100 of these Tapir signs. Sadly the real life version never came to the party

kuih muih - We thought we might find these sorts of treats in say Japan or Korea. The Malays have produced this array of fine morning tea snacks. A colourful kaleidoscope of delicious treats

After mile upon mile of palm plantations we finally got to a peninsula where we thought a wild camp would be possible. Unfortunately there was a decent sized Kampung (village) which scuppered our plan. So we pulled into a resort & asked if we could camp. The lovely ladies running the place not only offered us a room they also put us in front of a delicious plate of food complete with a cold brew. A night in an air-conditioned room was deluxe.

Palm plantations were by far the worst monoculture we experienced. Closely followed by sugar cane in Thailand

Singapore - the island at the end of Eurasia

The Johor Bahru - Woodlands causeway between Malaysia & Singapore is one of the world’s busiest border crossings with an estimated 300,000 people walking between the two countries every day. It’s also the main entry point for motorcycles & bicycles (the expressway crossing at Tuas is restricted to cars). This left us facing a ride through two mega cities & a long wait at the border. Luckily we were told a few weeks back you can catch a ferry from the east coast of Malaysia (Tanjung Belungkor) to Changi in Singapore. There’s also a ‘bumboat’ service from Tanjung Pengelin to Changi Village however you have to wait for a boat to fill before it leaves, or pay for the rest of the ‘passengers’ out of frustration to force its departure. So we took the Limbongan Maju ferry which was a breeze. Customs on the Malay & Singaporean side had 10 people and the crossing was beautiful. It also meant we could cycle all the way down the east coast of Malaysia on quiet & laid back roads. It was a great way to finish off our journey through peninsular Malaysia

Rather than cross one of the world’s busiest border crossings, we decided to take a ferry from the eastern tip of the peninsula which only had a handful of passengers

Cheeky Langur monkeys were our favourite primates by far!

Loading up the bikes for our ferry to Singapore