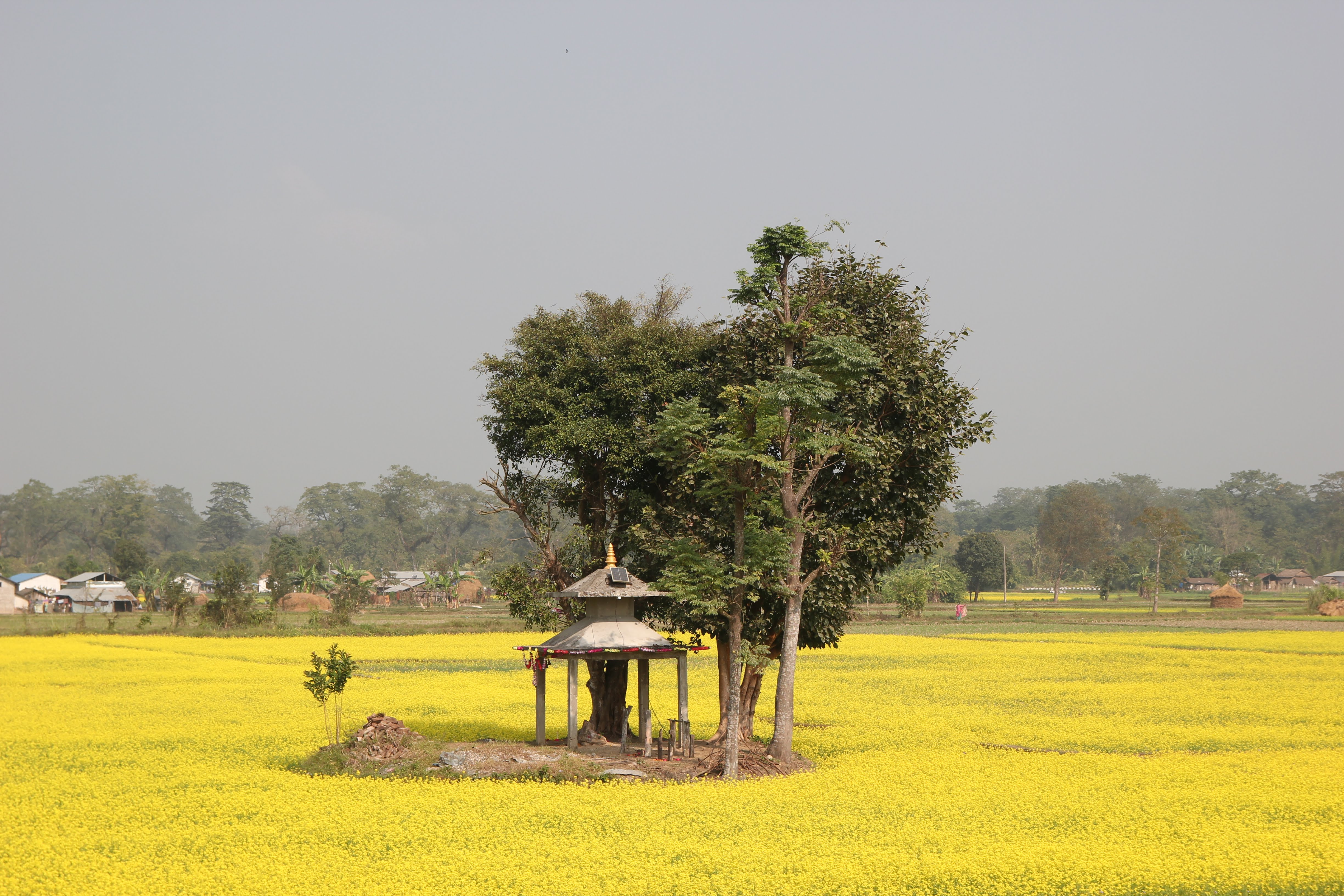 Namaste Nepal! This beautiful country with its gentle mannered people will forever be remembered with smiles. We entered the relaxed border near Bairahawa to claim our 15 day on arrival visa. Sadly we spent even less time than that here, and stuck south due to time restrctions, not making it up to Pokhara or Kathmandu - that we’re saving for a trip without the bikes!

The downside to our restricted time available was the restricted route, namely following the East-West Highway with everybody else. In our first few days we managed to weave on and off the road through local suburbs pretty successfully. Life off the highway is instantly taken at a slower pace. People ride bicycles, smile, bow low and Namaste when you wave hello. Farmland is neatly laid out into fields without fences and brightly coloured houses form suburban boundaries.

The food here is excellent. Lunches consisted of vegetable chow mein or momos (steamed dumplings) that we quickly became addicted to. Larger settlements also had cheap vegetable thalis which are served on a metal tray with dahl, rice and vegetable curry with a crispy poppadom on top, veg similar to Indian thalis.

Women on wheels, a common site throughout Nepal

Momos served with a spicy coriander and peanut dipping sauce

You’re forced back onto the highway as the road climbs up through humid jungle and drops down to the Narayani River. We had no problem wild camping in Nepal with ample forest or empty farmland. However, entering Bharatpur late one evening we found ourselves fruitlessly trying to find 3 camp sites marked on our map OSM - they do not exist!! Seeing a Garden Resort Hotel marked on the map, which definitely did exist, we decided to ask if we could camp there. The manager excitingly obliged and sat us down with tea and cakes immediately. He explained that just yesterday he had read in the local paper a news story about an Italian who had cycled to Kathmandu, also for charity, and was in awe of such a journey. We also found out that his brother lives in Mt Manganui, New Zealand, so we may be ale to return the favour one day!

The highway passes two national parks - Chitwan and Parda - both home to tigers, elephants and monkeys to name just a few mammals. Sadly (although maybe a good thing considering we were camping nearby), we only saw the latter, lots of them on the side of the road, chewing on plastic food wrappers that had been chucked out of car windows, a sorry sight.

Whilst the landscape is beautiful you have to keep one eye on the road and one in your rear view mirror constantly to make sure the trucks and buses are giving you enough room. It was pretty exhausting with the only saving grace being the amusing tag-lines painted proudly in giant letters on the front, back and sides. Lines such as ‘King of Speed’, ‘Road King’ and ‘Good Luck’ ringing more true than ‘Speed Control’ or ‘Free Wifi’!

Sheets drying on the banks of the river in Bharatpur

The closest we got to seeing any elephants in Nepal

Milly and a monkey

Kings of the road, you don’t mess with these guys

Sand, sun and miles from the beach

Leaving the Road Kings to themselves we took a turn south at Nawalpur to follow a road which traversed the Indian border. We could have easily been in India: the roads weren’t in great condition, suddenly people’s skin became darker, their dress more similar to those seen in Hindu villages and the smell of fried samosas, pakoras and sweet ghee-doused treats wafted through the air. During the day we drew quizzical stares and big crowds whenever we stopped, but as dusk fell fields were left empty and camping was a dream.

Any hope of the road improving past Janakpur as we joined the H17 East-West Postal Highway were quickly dashed. The road is still under construction and not due to finish until mid-2020. This meant cycling through a lot of sandy groundworks, weaving up and down around culverts in the making and pushing through several fords where only the bridge foundations had been built, sticking out of the water like candlesticks!

It was really tough going, with us only making 60km a day despite it being completely flat! It pushed me to the limit several times, BUT did provide us with an incredible insight into village life down here. Farming using bullock and cart, village water pumps, shared housing between beast and man, it felt a world away from the farming villages and colourful houses near the border we crossed.

Sand, sand and more sand ahead

Riding into the sandy sunset

…as well as brightly coloured mosques

We never grew tired of watching these gentle beasts trundle along

Selecting some village vegetables to cook up later

Eventually our road joined the main highway and it felt like we could suddenly fly on the smooth tarmac towards the border at Kakarbhitta and past bountiful tea estates. On venturing into one roadside estate we were denied entry quite severely into the factory but were given permission to roam through the tea bushes, which we did, and managed to find a hidden spot to camp. It was a perfect final evening in Nepal before hitting the hectic pace of India once again.

Probably an even heavier load than ours