Karlovrisi to Karditsa - The never-ending hills of Northern Greece 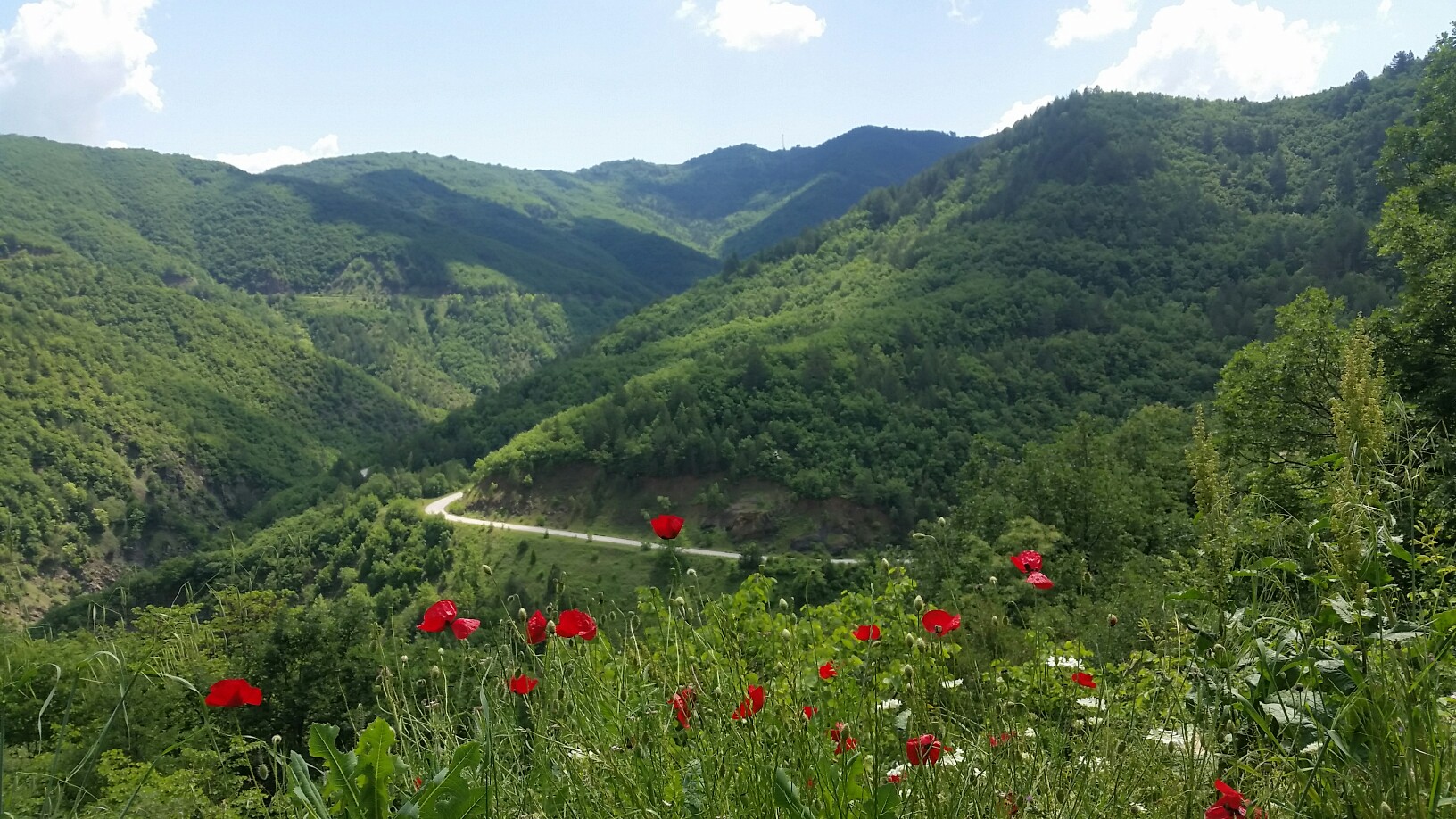 It was a nice quiet border crossing from Albania to Greece at Karlovrisi. The border control guys were also very friendly and taught us a few words in Greek - the basics, which we promptly forgot and had to look up again 5 minutes later! After a lunch stop by an ornate drinking fountain, one of many we would pass on the roadside in Greece, we headed for the hills where we had a decision to make. With an impending storm looming overhead, do we go left via Kalovrisi, a flatter route to start but longer overall, or right stright up into the Pindus National Park. We went right and whilst we got a good soaking we also got an amazing view of the storm over the valley. We camped near Kalpaki and stocked up in the minimart there as well as giving the lady at the bakery a big surprise with how much ordered!

Storm building down the Kalovrisi valley

Bee hives protected from bears with an electric fence!

Then the hills really start. We’d been told the Pindus hills were steep, and they sure are, 10% the norm, but they’re never too long. Another thing to watch for in this region is the farm dogs, who seem to hear you before you see them and barking incessntly won’t let up unless you stop and walk past them, when you’re just about out of sight they’ll stop the chase. Quite by chance we past beautiful old 18th century bridges and rock towers carved out by rivers and eroded over the years, similar looking to ‘pancake rocks’ in New Zealand. A car stopped to offer us water (cold and fizzy - a total treat) who also turned out to be cycle tourists but had to rent a car to finish their holiday because of an off the bike accident. The road stays high amongst the black pines, wiggling in and out of beautiful mountain villages such as Kipoi and Fragkades. On our third day in this region we’d come to expect rain in the afternoon as par for the course and just managed to reach Techniti Limni Aoou lake and find shelter for lunch before the downpour. Climbing up through summer pastures we turned onto the E92, a perfectly valid road on Google but which had a ‘No Entry’ sign blocking half of the entrance. Seeing as we had managed our fair share of closed roads in Albania without too many issues and seeing cars come out from the road we ventured on up. It’s a good road, just poorly maintained surface in sections. I imagine it would have great views from the top but we were greeted with thick fog, which rapidly turned to driving rain and took the temperature down a good 10 degrees. Descending down the other side we were both cold for the first time in ages!! Luckily found a camp in the forest between breaks in the storm.

A typical view from the road in Pindus National Park

View across the valley to Metsovo and the bridge on the main highway which weaves through the mountains via an impressive number of tunnels and raised roads.

Packing away a wet tent again, we were heartened by what looked like a downhill day from Panagia towards Kalambaka. Alas this was not so, the valley side traverse went up and down to pass through small villages and cross several streams running down the mountain. I couldn’t really complain though, the views were stunning across the lush green forest and the villages postcard-pituresque. Like earlier in Pindos we probably only passed 5 cars all morning. Beautiful sunshine and the odd friendly tortoise spurred us on, in addtion to an iced coffee given to us by the local priest Father Christos. He had beckoned us over when we had stopped to fill our water bottles in Ampelochori. Whilst his views on women in the church were pretty conservative, his english was very good and it was the first chance we’d had to converse properly with a local. He cleared up a few confusions, including the multiple Greek spelling of the same word, such as ‘Kalambaka’ or ‘Kalampaka’ - basically there is no right way and different people translate some letters differently! He’d asked us if we were heading towards Meteroa, which we ignorantly said yes, not really knowing what this was. Wow, were we in for a treat! Finally the road passed through the last mountain village and we got a view down a wide flat valley with an incredible rock formation sticking up like a beacon in the distance. It grew and grew as we got closer. Meteroa is a phenomenal rock formation which is home to a host of monastries built precipitously on the cliffs. We managed to find a camp spot looking directly across at it and watched the sun go down and twinkling lights of Kalambaka turn on. It was a magical evening.

A close shave…very nearly ran over the snake!!

Our first view of Meteroa

From Kalambaka a flat valley ride awaits!! We’d stumbled into Sunday though and every supermarket was closed, even in Karditsa a pretty big town. We managed to find a small mini mart open in Anavara before heading up the hill to Smokovo Dam. It was amazingly well stocked with homemade muesli bars, a bit pricey at 1 euro each but having done over 90km already and another 10 to go they were worth their weight in gold! The market also stocked benzene fuel which we needed for our MSR stove, otherwise we would have to go onto petrol, whcich is fine but dirty and clogs up the stove much quicker. It’s equivalent to white gas and the first time we’d seen it since Austria. The benzene came in the form of some kind of cleaning liquid so we just bought a small amount to make sure it worked - which it did so we stocked up further down the road.

Our first week in Greece has been tough riding but on the most beautiful quiet roads. The forests were incredibly lush and green, which explained the daily rain! From my perspective (as someone who enjoys the views from hills but am defintely in the slow and steady camp) it’s a good idea to have some hill preparation before tackling Pindos National Park. If we’d had more time it would have been nice to stay in some of the villages along the way and maybe do some walks as well. On to explore the hopefully drier lands of Central Greece…